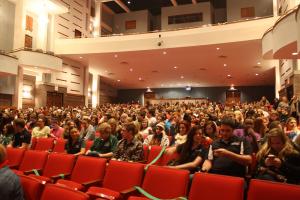 Ashley Favata photo: A huge crowd turned up to hear Bruce Jenner speak inside the PAC on Wednesday, Feb. 12.

His motivational speech titled, “Finding the Champion within,” motivated students to accomplish their goals just as he did in the 1976 Olympics, when he won a gold medal for his performance in a decathlon.

He told the audience about how he discovered this wonderful thing called sports in fifth grade. During gym class he was the fastest runner of the entire school.

Jenner left the audience with a last thought that encouraged students to gamble, cheat, lie and steal.

“Gamble your best shot in life. Cheat those who would hinder your success. Lie in the arms of those you love. Steal every moment of happiness,” Jenner said.

He presented a walk-through from the moment he realized he wanted to play sports, until he won his gold medal. Jenner emphasized at the beginning of his speech that your biggest competitor is you.

During his speech, Jenner emphasized that when he wants something in life, he will work hard for it. “You have to believe in the power of you,” Jenner said.

The television celebrity kept his speech about his success and did not mention his family or any controversial issues that they might be having at the time.

The expectant audience started lining up at the doors of the PAC an hour early, and right before the doors would open, the lines went all the way to the entrance of Zurn.

Before Jenner would make his appearance, a clip was presented that showed special moments of his performance as a professional athlete. When he finally made his appearance the audience gave him a warm welcome.

Students in the front rows had banners prepared for him.

Jenner’s visit to campus called the attention of the media as well. TMZ and US Weekly featured stories about his visit.

Jenner also said, “If you reach down into your soul, you can do amazing things in life.”

Jenner’s success and example motivated students to keep visualizing their goals and eventually achieve them.