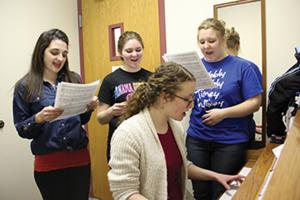 The Mercyhurst Theatre Appreciation Club is hosting its 2nd annual Winter Cabaret on Wednesday, Feb. 26, and is switching genders to do it.

With a fun theme like Broadway Backwards, Mercyhurst students will perform Broadway songs traditionally sung by the opposite gender.

Song selections range from Mr. Cellophane, Greased Lightnin’ and Worst Pies in London. Solos, duets and group numbers will all be featured as well.

This student run and organized event serves as the primary fundraiser for the club. Last year’s Cabaret was a big success for the club.

This year, TAC members plan to make Broadway Backwards an even bigger success.

While most students have busy schedules, few group rehearsals are in order for preparation.

Instead, it is up to each participant to rehearse on his or her own. Song memorization and blocking is done individually.

Club Vice President, Katelyn Cecchetti volunteered to assist those who have requested extra aid in blocking.

Being a student-run fundraiser, it takes every person to pull his or her own weight to make this event successful.

President, Mathew Anderson holds the reins and keeps everything in order.

Returning to the keyboard as the accompanist is Ian Gayford.

Gayford served as the music director for last year’s cabaret, along with the 2013 spring play Eurydice and this year’s fall musical, Urinetown.

The Theatre Appreciation Club’s marketing committee took on the responsibility of advertising and marketing the event entirely.

The club’s fundraising committee plans to keep the cabaret in the lineup for a fundraiser for years to come.

Students are encouraged to come and see a show packed full of catchy Broadway hits sung and choreographed by Mercyhurst’s very own students.

The talent is not solely music majors either. The club’s membership and involvement ranges from music majors to communications majors to anthropology majors.

All of whom are equally talented, committed and excited to be a part of the show.

Costing $5 a ticket, at the Taylor Little Theatre, the show begins at 8 p.m. Seats will fill up fast, and the event is open to students, staff and the public.

The club is accepting cash only at the door.

There will be no presale for the cabaret.

Grab a friend, and come early to get a good seat to see the Mercyhurst Theatre Club swap genders and sing your favorite Broadway tunes.

For pictures, sneak peeks of rehearsals and more information, go to www.facebook.com/mercyhurstuniversitythreatreprogram or follow @Mercyhurst_TAC on Twitter.