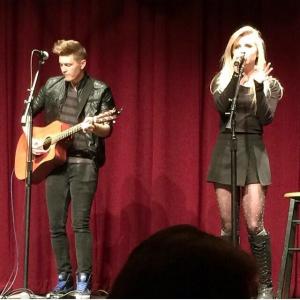 On Saturday, Feb. 15, two artists put on a free concert in the Taylor Little Theater for Mercyhurst students.

Newcomer Tiffany Houghton, along with her guitarist Adam Agee, performed first in the dual artist showcase.

Many attendees had never heard the singer prior to the showcase, but not a single audience member was disappointed.

Houghton had a strong stage presence and a powerful voice to match.

With over 1.2 million YouTube views and 95,000 Facebook fans, Houghton is clearly moving up in the music industry, but did not forget to stay humble.

She performed multiple songs and even dedicated one to a male audience member.

After her show, she and Agee dined at The Laker and then returned to the theater for a meet and greet with her multiple new fans.

Even after the concert was over, she was still interacting with students; multiple fans received follows on Twitter and Instagram, as well as some replies to their rants and raves over her performance.

This young woman is surely obtaining fame by her own standards and was a guest our campus won’t soon forget.

After Houghton and Agee, Geiger and his guitarist took the stage.
With such a popular single under his belt, he attracted multiple fans to the performance. He instantly began belting out songs like the crooner he is known to be.

While his guitarist Marcus played and sang back-up, Geiger accompanied him on the keyboard.

The couple showcased songs from both Underage Thinking and The Last Fears, Geiger’s two albums, released in 2006 and 2013.

Although the second artist was more focused on his music and the Exit signs in the back of the auditorium, his performance was strong.

To conclude his showcase, Geiger played his hit single “For You, I Will” and R. Kelly’s “Ignition,” both of which had the audience at the edge of their seats.

At the end of the concert, Geiger and Marcus were visiting with students and even spending time playing piano in the chapel of Old Main.

Kaleigh Ruggiero and Michelle Farley of Student Activities Council may have faced challenges in accommodating two artists in a single night, they pulled it off flawlessly and students raved for the rest of the weekend about the co-performance.

Sophomore Sam Beckas said of Houghton’s performance, “I was so amazed by her performance at Mercyhurst tonight and so thankful to have met someone with such talent.”