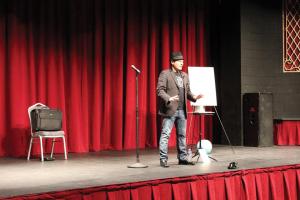 Alison Ockasi photo: Mentalist Joshua Seth performed in front of a crowd of students on Saturday, Feb. 22, in the Taylor Little Theater.

Mercyhurst students gathered Friday in Taylor Little Theatre to see the show “Beyond Belief: An Intimate Evening of Psychological Illusion,” and be amazed by mentalist, Joshua Seth.

Starting off the night, Seth had the whole crowd guess what number he was thinking of. He then brought a person who thought of the number on the stage.

Seth then wowed the audience with various illusions. A few of these included him being blindfolded, and figuring out what an audience member had written on a white board.
As he wrote the word “ROWING” across the white board the audience was astounded, but Seth didn’t stop baffling Mercyhurst students there.

He went on to guess an audience member’s phone number correctly and called him. He figured out numbers, places, and names that people in the audience were thinking of without ever having met them before.

Seth made it clear that he wasn’t using magic, but psychological mind games to find these things out.

Before becoming a mentalist, Seth was a voice actor. He lent his voice to many popular anime cartoon shows, playing Tetsuo in “Akira” and Tai in “Digimon.” He also was the announcer of various children’s cartoon blocks for the former WB network. Seth retired from voice acting in 2005.

Seth tours as a comedy hypnotist and formerly performed as a magician. Seth has also written a book on weight loss using hypnosis.

If you would like to learn more about Joshua Seth, his hypnotist and mentalist acts, you may visit his official website at joshuaseth.com.