Smoothie bar to open in Laker 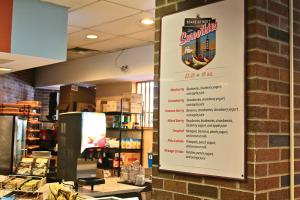 Salina Bowe photo: MSG will be opening the smoothie bar in the Laker Inn on March 17.

MSG developed the idea at the beginning of this academic school year to sponsor a place close to the gym where students would have access to healthy fruit smoothies. Each 16-ounce smoothie will cost $3.75.

MSG President Amber Penna has played a large role in the development of the smoothie bar. The smoothies will come in seven flavors ranging from classics like blueberry and strawberry to more exotic, tropical flavors.

“Student government does a project every year that they put a chunk of money towards. This year we looked at everything that would attract a student to our campus,” said Penna. “We looked at the food options on campus and we came up with the smoothie bar because it’s different and we don’t have it now.”

After test run for the smoothie bar in late December, Dean Schoenfeldt, Dining Services General Manager, decided there was sufficient demand for a smoothie bar.

“It’s geared towards having a healthy option. We’re close to the athletic center so we feel those people in spin classes and other classes can finish their day here,” Schoenfeldt said.

During testing, Schoenfeldt analyzed what times of the day most students went to get smoothies in order to assess optimum operating hours.

Senior Minh Phi believes having the smoothie bar closed on the weekend will not hinder its business. “Not many people eat here on the weekends anyway. It wouldn’t be busy enough,” Phi said.

Some students are not satisfied with the healthiness of the product. Senior Kellie Wendell frequents the gym and said she makes a smoothie every day for herself. She participated in the testing in November and thought there was syrup in the smoothie.

“[The price] is a little high if they go and add the syrups. If they make it natural and since you can use dining dollars for them, I guess it would be fine,” Wendell said.

Porscha Imperial, a senior, feels the price should be based on the quality of the product. “I think the price is fair if they use real fruit,” Imperial said.