Color will run through Erie 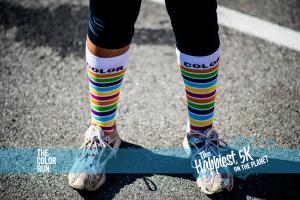 thecolorrun.com photo: The Color Run will be taking place on August 9 in downtown Erie with registration currently available through their website.

The Erie Sports Commission announced that The Color Run will be in downtown Erie Saturday, Aug. 9.

Since its founding in January 2012, more than a million people worldwide have taken part in the 5K. Over the years, the event’s popularity in the United States has grown, making it the single largest event series in the country.

According to their website, the event promotes the ideals of health and happiness. Their goal is to bring the community together and support this new running event.

There are only two rules to be part of the 5K: wear white at the beginning of the race and finish it covered in colored powder. After crossing the finish line, runners join the Finish Festival, a giant party consisting of music, dancing and more color.

“We were all in white at the beginning of the race and by the end we were covered in color, which was awesome. Everyone at the race was so supportive which made running the race easy,” said senior communication major Chris Gaertner, who did The Color Run last year in Cleveland.

Gaertner ran alongside his boyfriend and his best friends, also students from Mercyhurst. He remembers The Color Run as an unforgettable experience.

“I would love to be a part of The Color Run again but it all depends where I end up after graduation. I would ask the same Mercyhurst students who ran the first time to run again,” Gaertner said.

Gaertner believes Erie will be a wonderful place to host The Color Run, because of all the college students that will to attend. Even though the event will happen Aug. 9, before most college classes start, he still believes that there will be a high attendance of college students.

“I think Erie is a great place for a Color Run. Erie has a large college population and when I ran, there were a lot of college students, so I think having it in Erie will increase participation. A lot of students stay here during the summer as well,” Gaertner said.

“With Mercyhurst, Gannon and Penn State Behrend being here and Edinboro not that far away, there will be plenty of college students who still run the race, regardless of when it is.”

Even though it is a 5K, Gaertner encourages anyone who is open to have a good time to join the run.

“You can walk the entire thing if you want. It’s all about finishing. I saw people on crutches, people in wheelchairs and people without some limbs in the race. If they can do it, so can you,” Gaertner said.

Registration is $40 for individuals and $35 per person on a team of four or more. Registration prices are expected to increase as the event date approaches.

The charity, United Way of Erie County, will receive a portion of the money received from the event.

To register and for more information about The Color Run go to http://www.thecolorrun.com/erie/2014-08-09/.