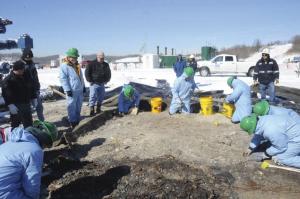 MAI photo: Dennis Dirkmaat, Ph. D., led a team of students that examined the remains of a gas well fire.

The explosion occurred Tuesday, Feb. 11, 2014, when natural gas leaked from one of the wells. The explosion ignited a fire that burned for five days at about 2,000 degrees Celsius, killing 27-year-old contractor Ian McKee.

According to Dirkmaat, the combination of intense heat, explosive force and five-day duration, resulted in the most extreme case of burning with which he has ever worked.

Coroner Greg Rohanna of Greene County called the Mercyhurst Forensic Anthropology Department to excavate what was left of McKee’s body at three locations around the site. The remains were brought to Mercyhurst for analysis. Students at Mercyhurst have a rare opportunity to work on real cases and apply their skills in the field.

Mercyhurst is often called in to recover or identify remains. This gives students a chance to get hands-on experience, which Chair of the Department of Applied Forensic Sciences Dirkmaat said is vital.

“The key thing about this is that the students get an opportunity to work on a real forensic case,” he said.

Even undergraduates have the chance to work on cases. In this particular instance, undergraduates Jacob Griffin and Sara Rapp got the opportunity to assist with recovery and analysis. Mercyhurst works on about 90 to 100 cases every year, five to 10 of those being recovery cases.

Students help identify the individual and determine sex, age, height, stature and bone fragments. Their first step in a case is to determine whether found bones are human or animal. Only after determining any remains are human would students begin to attempt identifying the person.

In a burn case like this one, it was particularly difficult to determine what a charred object was, especially since there were other burned items such as parts of a truck nearby.
Students must source the bones, excavate, take pictures, inventory findings, detail their work in the field and lab, and submit reports.

In this case, the department plans on submitting the report to the coroner in approximately two weeks so the remains can be given to the family of McKee.