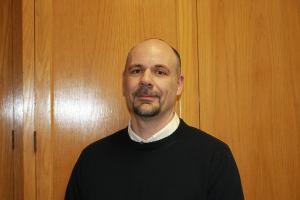 A Mercyhurst professor has been selected to be part of a history seminar in Chicago this summer.

Associate Professor of History John Olszowka, Ph.D., was chosen by The Council of Independent Colleges (CIC) as one of the 28 history professors to lead the seminar, “The Creation of the Modern American City: Chicago from 1830 to 1910.”

Prior to being selected, Olszowka was nominated by the Office of Academic Affairs because of his expertise in 19th and 20th century urban American history. Afterwards, the CIC, which consists of more than 700 national and international private universities and colleges, invited him be one of the 28 history faculty. They will meet from June 16 to June 20 at Northwestern University in Chicago.

Olszowka believes Merc-yhurst had an important role in the process. He claims the opportunities the university has given him led to this invitation, including the permission to start his own class, Making Modern America.

“I am fortunate more than anything,” said Olszowka. “I’ve had a lot of opportunities to begin to explore different areas that I am interested in and this is a class I develop uniquely to Mercyhurst. It allows for this class to develop and develops my understanding and at that point it makes it easier for me to apply for a grant or receive a grant like this.”

Olszowka knows little about Chicago. Regardless, he expects to acquire valuable information that will improve his knowledge as a teacher and an overall historian.

“I have little background on Chicago. I am more of an industrial historian. I am more into labor and working class history. Chicago is within the context of that. So I am excited about the ability to learn and take what I learned there and seeing on how does it fit to Erie, Buffalo, Cleveland and other areas,” Olszowka said.

Olszowka’s goal for the seminar is to learn more about Chicago’s architecture. Learning about this will improve his class, Making Modern America.

“I do a lot with the urban landscape architecture and I am hoping to develop my foundation of knowledge in that area with the idea that I can take and apply it to the classroom not just with Chicago but with other urban areas,” Olszowka said.

Chicago was considered a microcosm for urban change from the 19th to 20th century. The seminar is expected to explore the city’s chronology along with important topics about its development.

The week-long event will be hosted by Henry Binford, associate professor of history and urban affairs and Carl Smith, professor of English, American Studies, and history at Northwestern University.