The Lakers have record of 9-8 with senior Cailin Jope leading the team with 38 goals scored, 10 assists, earning a total of 48 points this season for her team. She also has a team high of 31 steals.

“It feels good to know that Mercyhurst is not being overlooked. Having team members earn this award shows that we are competitive within the Southern division,” Sworden said.

“It’s cool to receive the Southern Award, there are a lot of good players in the Southern Division and for me to be selected feels great,” Jope said. 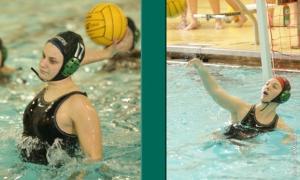 “I think the team has done well, but I know we can do better. As a team we have certain aspects of our playing that we do well.”

“If we can take the things we do well and make the details even better, we can take our game to a higher level in these next few weeks of league play,” Sworden said.

“I think we’ve done very well coming together as a young team. We had a lot of new players last year and received a lot more this year. We have worked hard year round and this has created great team chemistry and we bring this to our games.”

“Winning DII Champs was a great step for this team for we just came off of a long spring break with not winning too many games. Despite the losses, we pumped ourselves up and played two great games to become DII champions again,” Jope said.

The women’s waterpolo team will travel to Grove City to take on Grove City College Thursday, April 3 at 6 p.m.