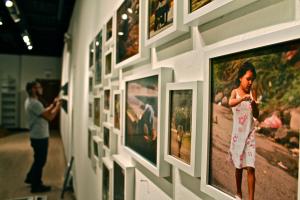 miac.mercyhurst.edu photo: The Ahn Trio, a multicultural and multi-instrumental group, will perform in the Walker Recital Hall on Thursday, April 3.

The Seattle Times says, “With their multicultural assortment of composers and a huge talent, these women have a modernist, fusion sensibility that is perfect for our age.”

On Thursday, April 3, Mercyhurst will play host to the Ahn Trio, in the Walker Recital hall at 7:30 p.m.

These world-renowned sisters have taken the musical world by storm. Lucia, the piano player, Angella on the violin and Maria on the cello have been known to mix contemporary music with well-known classics to create a dynamic musical experience that will leave audience members enthused and awed. The sisters say their style is classical music for this century.

The members of the Ahn Trio flourish on breaking down the barriers between art forms.

They have worked to fuse their work with others, such as dancers, singers, DJ’s, installation artists, photographers, and even kite makers.

Their performances often include visually appealing staging and programs that are announced and discussed for the stage by the trio.

Recently, the trio has performed in the Czech Republic to sold-out shows. Their unique blend of styles makes the critically acclaimed Ahn Trio one of the most anticipated shows of the season.

Before the start of the show, audience members should meet in the lobby of the Walker Recital Hall, for a Taste of Spring.

The Ahn Trio’s company sponsor, Frankie and May Fresh Grocer, will be there with tastes of delicious food for audience members to sample.

Trying to show the abundant availability of organic food in the Erie area, Frankie and May Fresh Grocer will bring samples from their café and other locally located growers.

Ticket prices for this explosive show run from $27 for adults to $18 for youths and students.

For more information, visit the Mercyhurst Institute for Arts and Cultures website at miac.mercyhurst.edu.