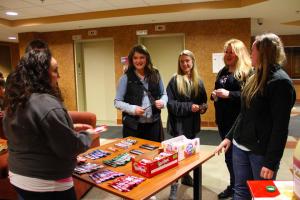 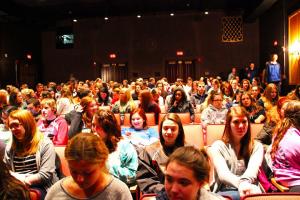 Mercyhurst University hosted over 100 prospective students this past weekend during their Laker Live-In event.

Laker Live-In a yearly event organized by the Admissions and Residence Life offices that allows accepted high school seniors to stay overnight with a freshman in a campus residence hall.

Each freshman residence hall had an event planned for the prospective students. Baldwin Hall featured a girl’s spa night. Warde Hall featured a movie night while McAuley Hall had can jam and corn hole.

The program began in 2011 when two resident assistants in Warde Hall decided to put on a program for the visiting students.

Assistant Director of Residence Life & Student Conduct Michael Grasso explained that the RAs wanted to “do something fun for them,” so they created a luau party with games and food called “Laker Luau.”

“They had a pretty good turnout, and I think the kids appreciated having somewhere to go,” said Grasso. “The following year we decided to build on that. All the staff got involved and we decided to continue the program and make it bigger.”

According to Grasso, Laker Live-In is a way for the incoming class to “live the experience” after they visited and applied.

“Now it is time to show them what the campus life is actually like,” Grasso said.

Current freshmen serve as the prospective students’ hosts, which is appropriate, according to Grasso.

“…[T]he current class of freshmen students have most recently been through that transition, and also because they live in the dorms, which is where their Lakers will be living for the first year at Mercyhurst,” Grasso said.

Caitlin Dee, a freshman in Baldwin Hall, participated as a host. Dee said she tried to show her prospective student the benefits of coming to Mercyhurst.

“I wanted to show my Laker all the great things Mercyhurst has to offer, and the fun events that go on all the time. I also wanted them to see what it will be like for them living in Baldwin Hall because I have really enjoyed my time here,” Dee said.

Dee declined to attend Laker Live-In as an entering freshman and regrets her decision.

“I wish I would have attended the Live-In as an incoming student only because I feel that the transition would have been easier,” said Dee. “It is hard going from living with your parents your whole life to being on your own.”