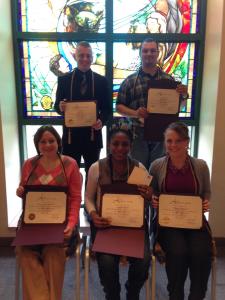 Contributed photo: New members of the honor society Alpha Sigma Lambda pose for a photo after a ceremony, which recognized their efforts and academic excellence.

Last Thursday, April 3, the National Honor Society for Non-Traditional Students, Alpha Sigma Lambda, welcomed eight new inductees from Mercyhurst. The society’s aim is to recognize the academic success of adult students. Adult students are recognized in this way particularly because, in most circumstances, they are not just attending classes and completely projects.

Adult students have the challenge of balancing school work with their home life while also dealing with their work schedule.

According to its mission statement, Alpha Sigma Lambda “is dedicated to the advancement of scholarship and recognizes high scholastic achievement in an adult student’s career.”

To be inducted into the honor society, an adult student must have completed at least 24 credit hours while maintaining a 3.2 grade point average on a standard 4.0 scale.

The Mercyhurst inductees involved in this ceremony included Eduardo Ortega JR., Carl Best, who served our country as an Intelligence Analyst and is now majoring in Intelligence Studies with a minor in Russian Studies, Juan Quevedo and Rachel Curtis, a Sociology major who has three children and a husband. Curtis is back in school after getting her degree from Mercyhurst North East in early childhood education.

Also inducted were Cynthia Dunn, who cares for two girls and is attending Mercyhurst as a Public Health Major with goals to create support groups for at risk young girls in the community, Kerry Dieter-Roward, Chance Nye and Tiffany Patterson, who plans to gain her master’s degree and, eventually, her Ph.D. to further her career after Mercyhurst.

During the ceremony, Peters gave a brief explanation to what Alpha Sigma Lambda meant. “Alpha is the first letter in the Greek alphabet; therefore it stands for ‘first.’ The letter Sigma corresponds to the letter ‘S,’ and is symbolic of scholarship. Lambda corresponds to the letter ‘L,’ and denotes leadership. Thus, Alpha Sigma Lambda forms the framework of our motto, which is ‘First in Scholarship and Leadership.’”