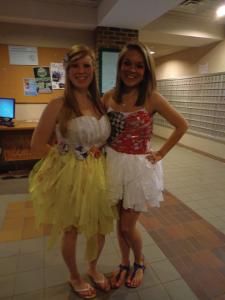 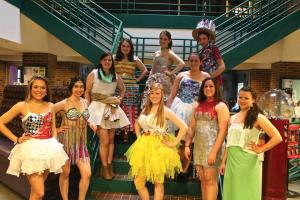 Salina Bowe photo: The models who participated in the Trashion Show pose for a photo after the conclusion of the event.

On Monday, April 28, being green had never looked so fabulous on Mercyhurst campus, as the Art Education Club hosted its second annual “Trashion Show” in the Student Union Great Room.

Senior Art Education Major Megan O’Polka, who has been in charge of organizing the event the past two years, explained that the club “invited anybody on campus to make an outfit out of what would be considered trash.”

“We tried to emphasize the point that they should be using recycled items,” she said.

The event gave student models and designers the opportunity to strut their clothing creations out on the illuminated catwalk for a nearly full audience of students.
O’Polka said the club wanted the evening to be “a combination of being green and doing something creative.”

The winners of the main fashion contest were chosen by a panel of three judges who were asked to rate the contestants on a scale of one to ten in three categories: Creativity, Trashiest and Most Wearable.

Graphic Design Professor Jodi Staniunas Hopper, one of the three judges of the evening, said of the show: “There were a lot of bustiers and they were well constructed. I was happy to see that the winner had a different style than everyone else’s. I think that goes towards creativity.”

Mary Meier, Ph.D., Assistant Professor of Art and advisor to the Art Education club, said after the event that “It was great to see the creativity… This is something that is a trend in our education right now. To up cycle and recycle for wearable design. It’s part of something that is happening all over the state. Another name for this is Project Innovate, but the students have named this The Trashion Show.”

After the show, O’Polka, who also designed and modeled in the event, said, “I thought we had some really good dresses, and I was glad that we had more than just the club participating. I am happy with it overall.”