Sami Rapp photo: The large HOPE mural was present throughout the entire Relay for Life and was covered in tributes to those lost to cancer.This past Saturday, Mercyhurst University held its fourth annual Relay for Life in Garvey Park. There were plenty of activities and give-a-ways to keep the excitement going throughout the day, including multiple performances, games, and a bounce house. The main reason for the event was to raise money and awareness about a disease that affects almost every American in some way.

According to the American Cancer Society, over 1 million people are diagnosed with a form of cancer annually and almost everyone has had a connection with the disease.

This past Saturday, the Mercyhurst community played their part in the fight to a cure with 12 hours of empowerment and hope toward reaching the end of this powerful disease.

There were 350 participants and 40 participating teams this year, each representing a different country. The event began with each team member taking a lap around the track.

Just as at any Relay event, team and community members walked laps around the track, entered raffles, and participated in the creative activities offered by various teams. Team
Guyana offered Forget-Me-Not seeds to plant to remind those of their loved ones’ battles with cancer.

The MSG table had a competitive bounce house game as well as free Spring Fest tickets for this Friday’s event.

The most popular table of the day, however, may have been the Starbucks table, offering warm drinks to make up for the cold temperature outside.

The day continued with brunch and dinner, as well as cake and ice cream to celebrate The American Cancer Society’s “more birthdays” initiative.

Each hour, the laps were themed and accompanied by give-a-ways, provided by the society. 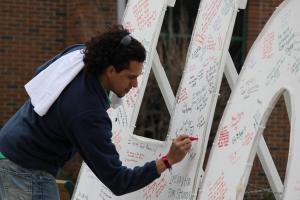 Caitlin Dee photo: Corey Sayles leaves his reason for relaying on the large sign which adorned the Relay for Life in Garvey Park on Saturday.
Event chair and co-chair Jeni Politano and Kelsey Eckhoff, as well as 16 committee members, under the advisory of Michael Grasso, have been organizing the event for months in advance.

There was plenty of entertainment to keep the energy alive, including a performance by The Hoop Troop, lessons after the show, the Mercyhurst Pep Band, motivational speakers, and music between the events.

The event raised $20,686.52 to donate to the American Cancer Society, which is a huge success, according to Eckhoff. Saturday’s event was a fantastic success, a day full of hope and empowerment to those involved.

Regardless of the weather, students and community members alike joined up for the fight against cancer in the hopes of raising awareness and bringing and end to such a devastating disease.