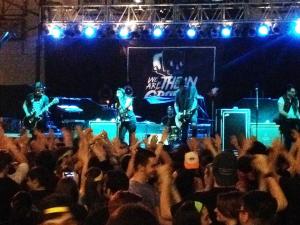 Casey Bleuel photo: We Are the In Crowd plays during the Springfest concert in the Mercyhurst Athletic Center.

This past weekend, the annual event known as Springfest took place on campus. The event was a success, according to MSG.

The event started at 5 p.m., on Friday, May 2. Tables were set up outside the Student Union that distributed food items, including soft pretzels, corn dogs and ice cream sandwiches. These tables were run by members of the ParkHurst staff.

At 7:30 p.m., the doors to the main concert event of Springfest opened. Four rock bands played in the Athletic Center. These bands were Transit, We Are the In Crowd, New Politics and Mayday Parade.

Transit, who started at 8 p.m., played first for an hour and was followed by We Are the In Crowd. These two bands, from Boston, Mass. and Poughkeepsie, N.Y., respectively, managed to get students to go crazy in the audience with their mix of alternative and pop rock.

At 10 p.m., New Politics played. This was the alternative rock band’s first time playing in Erie, Pa., as they hail from Copenhagen, Denmark.

New Politics was arguably the most audience-interactive and visual band that night. Lead singer David Boyd did flips and break dance moves on stage. There was also a point during the performance where a group of audience members lifted him up on his feet while he sang.

Mayday Parade, the final band of the night, went on at 11 p.m. The alternative rock group from Tallahassee, Fla., closed the night out with their alternative rock songs. Lead singer Derek Sanders, at one point during the performance, sang a piano ballad which had students lifting their cell phones in the air, simulating lighters.

The final activity of Springfest took place on Saturday, May 3, at 9 p.m. This was a showing of the Disney movie “Frozen” in Garvey Park, outside of the Student Union. Students sang along with the songs from the movie while snacking on snickerdoodle popcorn.

“Springfest was a great success. Everyone who worked to put the event together did an amazing job as a team,” MSG Public Relations Coordinator Garrett Erwin said. “This was my second year working for Springfest, and it’s always a learning experience. A lot of work goes into the show and it’s always great seeing people having a good time and knowing that our handwork pays off.”