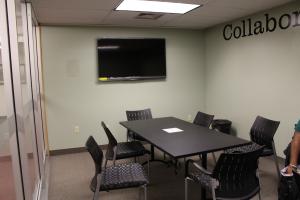 Caitlin Dee photo: The Collaboration Zone is located on the second floor of the Hammermill Library and is dedicated to group projects.

In the face of adversity, Mercyhurst University’s senior class completed this year’s senior class gift, and in the process, achieved three accomplishments never before done by a senior class.

According to Jacob Griffin, a senior Forensic Anthropology major and Fundraising and Participation Chair of the senior gift committee, students were not able to electronically donate their housing deposit to the senior gift.

Normally, students can donate all or part of their housing deposit to the committee via the Alumni website.

“We are the first class since the early 1990s to have to actually raise all of the money on our own,” Griffin said.

The renovations include new paint, carpeting and furniture, along with a module where students can plug in and connect four laptops that all display on a single monitor. The room will also have a white board wall on which students can write, similar to the ones in the Center for Academic Engagement.

“We got interior design involved, the library, and the IT department and came up with a proposal to do this study room,” Piasecki said.
Griffin said he hopes more Collaboration Zones are created on campus.

“We want to do this project because it is something that is keeping [Mercyhurst University] competitive with other schools,” Griffin said.
The second gift proposal is the addition of a Student Section to Tulio Field.

Griffin said the University challenged the students to raise enough for both gifts.

This is also the first time one of senior class gifts was completed before graduation.

The dedication of the class gift will be held on Friday, May 16, at 1 p.m. in the Chapel Foyer, and will also feature a ribbon cutting ceremony for the Collaboration Zone. The new student section in Tulio Feild will be completed over the summer.