Mercyhurst University appears to have an air of solidity and firmness. The stones and bricks rise into the sky and command the surrounding area as if it has, and always will be, present on the landscape. It seems almost impossible for the school not to exist, but creating the institution was no easy task.

One hundred years ago, East 38th Street was a dirt track through farmland called Cooper Road. Mother Borgia Egan, along with other Sisters of Mercy stood on that street in 1922 and decided to purchase the land to build a school that would serve as a high school and college for young Catholic women.

The Sisters raised $10,000 for an expansion on a school in Titusville, but instead, made the daring business plan to build, open and run an entirely new school in a completely different city. 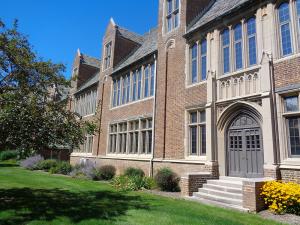 Taylor Rollins photo: The oldest section of Mercyhurst, Old Main, was built to last.Mother Borgia purchased the land for $50,000. Of course, the sisters then had to come up with the money to build the school, and throughout the several-year building process they ran into problems; the striking, slanted, slate roof was going to cost more money than their bank account held, but instead of redesigning Old Main’s rooftop, the sisters took a new slant and sold handmade candy until they brought in enough money.

With only a week until the school was scheduled to open, the workers went on strike. Instead of postponing the opening date, the sisters rolled up their sleeves; they finished the construction until Mercyhurst was able to open its doors for their first class of 23 students.

Next time you find yourself falling asleep in class, just remember how hard those before you worked to create the room you’re dozing off in, and offer up a silent thanks before you take your nap to those nuns who had a “habit” of hard work