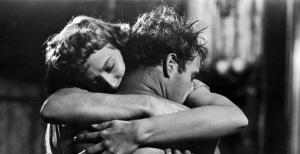 The iconic classical film A Streetcar Named Desire will be showing in Taylor Little Theater on Sunday Sept. 28.: miac photo

In continuation with the tradition of Sunday afternoon movies, Taylor Little Theater will once again play host to the community of Erie-ites and students who will be coming to enjoy a midday flick.

This week’s showing will be of A Streetcar Named Desire, a classic play by Tennessee Williams written in 1947 and brought to life on the big screen by Elia Kazan.

The film is set in a seedy section of Downtown New Orleans, and stars Vivien Leigh as Blanche.

Blanche is a run-down Southern belle who has arrived in New Orleans to visit her pregnant sister Stella, played by Kim Hunter.

Upon her arrival, Blanche is appalled at where and whom with her sister has taken up residence: a small apartment in a shabby neighborhood with her husband, a gruff man named Stanley, played by Marlon Brando.

Stanley, aware of Blanche’s distaste of him and Stella’s lifestyle, takes an immediate dislike to her, and the two butt heads throughout the entire movie over the fact that Stanley also believes that Blanche is holding on to inheritance money that belongs to Stella.

In finding herself attracted to one of Stanley’s friends, Blanche tries to start a new life and leave the past behind her, but soon her miserable and twisted history comes back to haunt her and leads to a final, violent confrontation with her brother-in-law.

The classic film will be shown on Sunday, Sept. 28 at 2 p.m. in the Taylor Little Theater.

All tickets are $1, so make sure you head over to experience the iconic movie, A Streetcar Named Desire.