“We’ve showed signs of success and have been very close in a few games. I feel that this week we are going to figure it out and knock off a good IUP team,” Novak said. 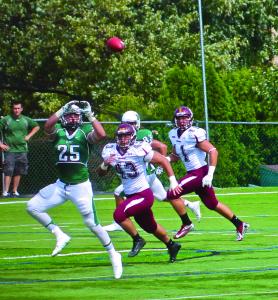 Redshirt senior tight end R.J. Miller received a 13 yard pass from redshirt junior quarterback Brendan Boylan for the first touc: Salina Bower
The team is ready to put the loss behind them and focus on next week’s game against rival IUP on Saturday, Sept. 27. The game is scheduled to start at 4:00 p.m. at Indiana, Pennsylvania.

The Mercyhurst football team had their first home game this past Saturday, Sept. 20 against Bloomsburg University.

Bloomsburg defeated Mercyhurst 38-22. However, Mercyhurst came out hot scoring two early touchdowns to put them ahead 14-0.

The first touchdown was made by redshirt senior R.J. Miller on a 13 yard pass by redshirt junior quarterback Brendan Boylan.

Senior free safety Colin Kimball kept the home crowd hopes alive with a 61 yard punt return for a touchdown. Throughout the game he lead the team with nine solo tackles and an interception.

The excitement was short lived after they allowed two interception returns for a touchdown on back to back drives. Overall the team had six turnovers that resulted in 28 of Bloomsburg’s points.

Early in the fourth quarter another completed pass by Boylan was made to junior wide receiver Jaquan Williams for the second touchdown of the game.

True freshman wide receiver Brad Novak started in the home opener for the Hurst and feels the team can improve from this week’s mistakes.

“We turned the ball over too much. Anyone watching the game could see that. This week in practice we need to focus on ball security,” Novak said.

With numerous turnovers in the first three quarters, freshman quarterback Ramroth Finnegan took the field late in the fourth completing his first two passes for 29 yards.

“It was an extremely exciting feeling to be able to take my first ever collegiate snap in front of the home crowd. The support from them was great and I really appreciate all the fans who came out to watch us,” Finnegan said.

Novak was also excited to start in front of the home fans who were more than ready to cheer on the team.

There were nearly 2,200 fans in attendance at this game. There was also a pep band at the game which is new to Mercyhurst. The band got the crowd involved by playing familiar songs as well as starting chants with the cheerleaders throughout the game.

“It was amazing being out there in front of the home crowd. Having the fans cheer us on really helped with momentum. Even when we found ourselves in tough situations we were able to capture some momentum with the fans cheering us on,” Novak said.

Novak believes this team has what it takes to win and they have shown what it can do on offensive this week scoring 22 points.