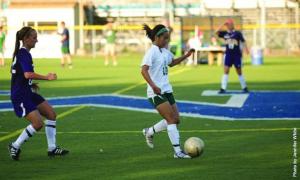 Senior Janine Wong scored the Lakers one goal during their game against East Stroudsburg Saturday Sept. 20. This is Wong’s third: Jennifer White

The Mercyhurst women’s soccer team has entered the national rankings in the top five of the Atlantic Regional Division by the National Soccer Coaches Association of America (NSCAA).

However, the Lakers overall statistics retrogressed to 2-3-1, after falling to No. 3 West Chester, 2-1 on Friday Sept. 19 and East Stroudsburg, 2-1, on Saturday Sept. 20 respectively.

On Friday’s game, Junior Kristina Roberti scored her second goal of the season in 54th minutes into the game. She beat West Chester’s goal keeper to the right after receiving a pass to the middle of the box from sophomore Linnea Laitinen who had received a corner kick from senior team captain Janine Wong.

The Lakers played aggressively the second half of the game and had several chances of scoring, but this was not enough to put the ball in the net for the second time.

The goal for the Lakers against East Stroudsburg on Saturday came from a quick free kick just outside of the box by Wong.

“I think we have a lot of potential as a team and that we’ll definitely be able to look past these losses, play well and get some more wins this season,” Wong said after Saturday’s game.

The last three games have been a crushing defeat for the Lakers, but this bad taste will get the ladies ready to rebound and play harder the rest of the season.

“I believe there are very talented individual players and great depth in the whole squad to have a very successful year. There is a great buzz around training that will make us come back to the top of the rankings,” grad student Rachel Fulton said.

Fulton is one of five new players that form Coach Keith Cammidge’s squad for this season.

The Lakers’ next home game is against Daemen College whose record is 2-5-0. The game is scheduled for Saturday, Sept. 27 and kickoff is set for 1 p.m.