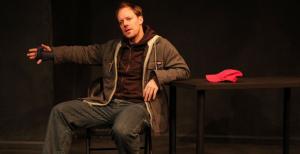 The show “Mercy Killers” focuses on Joe, a patriotic man, who loses faith in America once his wife is diagnosed with cancer.: miac photo

The show focuses on a patriotic man named Joe, whose view of life is changed forever when his uninsured wife, Jane, is diagnosed with cancer.

Joe struggles with the American experience of losing your health in the land of plenty.

This show has played at numerous other venues, with many praising its honest look at the health care system, as well as the inner turmoil of a man who is losing faith in his country.

Writer/director Michael Milligan graduated from Julliard and has directed and starred in a few shows on Broadway.

He also portrays Joe, whose performance has also been heavily praised.

Students should expect an honest, serious portrayal of how an individual can be affected by the present healthcare system.

A “making-of” trailer for the show on YouTube suggests that it is well-written and will not pander to the audience, but rather be straight with them about the mental and emotional struggles people endure in similar situations every day.

After the performance, a panel of public health professionals will sit down with playwright and actor, Michael Milligan, for a conversation on the importance of this piece of theatre.

This event is being gifted in memory of Charlene M. Tanner by her partner Doris Cipolla, due to their shared interests in social justice, and their hope that this program will inspire others to create a better world.

“Mercy Killers’ is playing in the Taylor Little Theatre on Oct. 2 at 7 p.m.