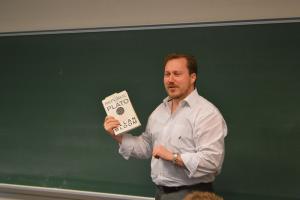 A native of Erie, Solymosi grew up familiar with the Mercyhurst, often being pushed around the campus in a stroller by his mother.

Today, he teaches Philosophical Inquiry and Pragmatism and Neuroscience behind those same open gates.

When he graduated high school, Solymosi left for Allegheny College, graduating in 2003. He went on to earn his master’s and doctorate degrees at Southern Illinois University Carbondale, never thinking he would be back to Erie.

When the job opened up at Mercyhurst, Solymosi said it was the perfect situation.

“It was a no brainer,” says Solymosi.

“The job description fit me to a ‘T.’ I figured, ‘Hey, why not? See what happens.’ Before I knew it, the job had been offered,” he said.

His professor at the time, Craige Champion, through his lectures, gave him a look at what an intellectual life was like.

Greek history led Solymosi to pursue a philosophy course on Ethics and Community. This is where he read John Dewey. In his book, “Human Nature and Conduct,” Dewey discusses his notion of everything being rooted in morals. This sparked something in Solymosi.

Solymosi is also interested in science. He tries to incorporate both of his passions into his current research.

One of the topics he explores is the conflict between the humanities and science. The connection between consciousness and science lies in the interaction between humans and their environment.

“You have to look at the brain and the body in its environment and our environment is not strictly natural, it’s also cultural,” Solymosi said.

By bringing all of this together, Solymosi said this is the only way to have a full theory of consciousness.

According to Solymosi, deciding what to research depends on how excited the topic makes him. He suggests this same technique to students.

“It’s hard work. And if you’re not motivated to do it, if you don’t have an interest, it is not going to happen,” he explained.

“That is what I try to encourage students when they write,” says Solymosi.

“Find something you’re genuinely curious about and then pursue it with all you’ve got. Then, you will produce something good.”