Football dominates at the Big House 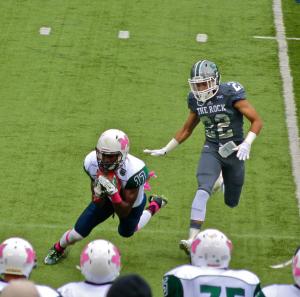 Junior Jaquan Williams (17) had two touchdowns in the fourth quarter during Saturday’s game to secured a Laker win.: Salina Bowe

After a year of anticipation, the Big House Battle between Mercyhurst and Slippery Rock at Michigan University had finally arrived.

The Mercyhurst football team made the trek to Ann Arbor, Mich., on Friday, Oct. 17, arriving at the Big House around 5 p.m.

The team was filled with excitement and awe, taking selfies and boasting smiles before holding a walkthrough practice at the stadium.

Redshirt senior defensive back Deonte Huggins was both nervous and excited that he got to play in such a big venue.

“It was amazing. As I walked through that tunnel I got a rush of adrenaline. I had butterflies like crazy,” Huggins said.

Huggins knew he had to make some big plays, as he did not want to lose to Slippery Rock in front of such a large crowd.

“It was a once-in-a lifetime experience, and definitely something I’ll tell my kids about,” Huggins said.

“It was breathtaking, just such a cool experience for both teams,” Boylan said.

Boylan was nervous but he had a good way of combating the anxiety.

“It’s the same size as Tullio [Field], only a hundred yards. There were just more people watching us. The biggest thing was taking a deep breath, relaxing, and just playing Mercyhurst football,” Boylan said.

The Laker offensive line was showing their true talent. Boylan had a stellar performance, throwing 385 yards and four touchdowns. Redshirt junior halfback Brandon Brown-Dukes had a good outing, getting 25 touches on the ground for 100 yards, while also adding 46 yards off four catches and a touchdown.

Overall, the Lakers recorded 536 yards of total offense, with 304 of those yards coming in the second half.

The Lakers began scoring in the second quarter when they were down 10-0. Brown-Dukes scored the first touchdown off of a completed pass from Boylan. After a good field goal kick by sophomore Dylan Kondis, the score was 10-7.

Throughout the second quarter the scoring went back and forth between Mercyhurst and Slippery Rock.

During the third quarter, the Lakers started playing even harder. Redshirt junior Donny Holl received a six-yard pass thrown by redshirt sophomore quarterback Zach Emerick to put the Lakers in the lead 24-23.

Following was another Laker touchdown by redshirt senior R.J. Miller making the score 31-23.

In the fourth quarter, two more touchdowns were scored by junior Jaquan Williams. The first was a 39-yard touchdown throw and the second was a 22-yard rushing touchdown.

Slippery Rock’s offense came into this game averaging nearly 515 yards with help from running back Shamare Greene, who is ranked second for rushing in the PSAC.

These numbers did not intimidate the Lakers, as they held Greene to just 56 yards on 13 carries and Slippery Rock to only 83 total yards in the second half.

With this recent change of pace, the Lakers gained their third straight win, improving to a 3-4 record.

Boylan believes that the recent changes in the Laker wins have been the players themselves. He says they have not had to make many adjustments to the playbook, but that everyone on offense has stepped up and made huge improvements.

“It’s been a great couple of weeks for us, hopefully we can continue that and finish off with a winning record,” Boylan said.

The Lakers will make the short trip to Erie Veterans Memorial Stadium this Thursday, Oct. 23, to take on Edinboro University. Kickoff is at 7 p.m.