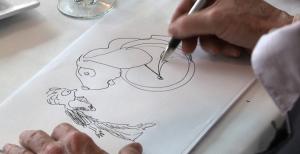 When the snow begins to fall as it did in Erie this past weekend, the best activity to do is warm up indoors and turn on a movie specifically the movie playing this weekend at Taylor Little Theatre.

The weekly film being played this Sunday is called “The Phantom Tollbooth: Beyond Expectations.”

The film playfully centers around the making of the children’s book that today is hailed “as the Alice in Wonderland of our time.”

Through interviews, animation and archival materials, it examines the creation, creators and lasting impact of one of the most beloved pieces of children’s literature.

The film introduces the audience to the hilarious world of “The Phantom Tollbooth,” written in 1961 by Norton Juster, as well as some of the novel’s more serious themes.

In the film, viewers watch Juster’s development of the novel’s wordplay and observe the artist and illustrator draw the protagonist Milo.

Eric Carle is also featured in the movie as he reflects on the creative process of illustration.

Though the children’s book, written in Brooklyn during the Cold War, seems to be merely the story of a bored young boy who travels to the Land Beyond to save princesses, it is so much more.

The film illuminates the book’s deeper themes: the value of learning, the state of children’s literature, the creative journey and the importance of the written word.

The book triumphed and has sold nearly 4 million copies to date and been translated into 20 languages.

Be sure to stay after the film to converse with the filmmaker on the larger themes of the movie and book.

The film will be shown on Sunday, Oct. 9, at 2 p.m. in Taylor Little Theatre.