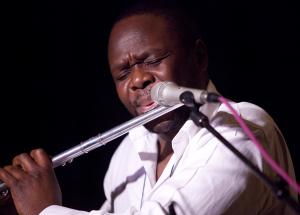 The internationally celebrated musician comes together with Grammy Award Winner David Cullen for a show that seeks to bring two musical worlds together.

This night concludes a week-long artist-in-residency program that brought Samite to Erie locations such as the Barber Center, the National Alliance on Mental Illness, the Mercy Center for the Arts, ExpERIEnce Children’s Museum, Music for Veterans and many more.

Born and raised in Uganda, Samite’s grandfather was the one who taught him to play the traditional flute.

At age 12, a music teacher placed a western flute in his hands, quickly setting him on his way to becoming one of East Africa’s most acclaimed flute players.

He performed to enthusiastic audiences in Uganda until 1982, when he was forced to flee to Kenya as a political refugee before he immigrated to the United States in 1987, where settled in Ithaca, New York.

Today his vocals accompanied by the kalimba, marimba, litungu and various flutes, mesmerize audiences around the world.

This show is sponsored by WSEE Media.

Ticket are $10 for students.