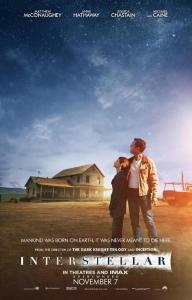 “Interstellar” might not be director Christopher Nolan’s best work, but audiences will not leave disappointed.: comingsoon.net photo

“You gotta admit one thing. You can’t beat the view.”

This line is uttered by George Clooney’s character in the 2013 sci-fi hit “Gravity” and can be applied to “Interstellar” as well.

Christopher Nolan’s cinematic foray into space and time boasts of wondrous visuals and admirable ambitiousness, but it is not without its flaws.

Anyone who saw “Inception” and “The Dark Knight Triology” can attest to Christopher Nolan’s dexterity with finding an intimate story within the grandiosity of his set-pieces and visuals.

In “Interstellar,” Nolan does exactly that.

There are a few emotional and gut-wrenching scenes in the movie that had many audience members driven to tears.

Did I mention the visuals?

The visuals in this movie supersede those of any other film this year.

I felt like an astronaut for the most part of its 3-hour run.

An original, convincing narrative is one of the few things that this movie is deficient in.

A skilled widower and father leaves his children to embark on a mission with the promise of being reunited with them soon.

The tone of disappointment in this review only stems from the fact that I expected a wildly original narrative from Christopher Nolan, one of the greatest auteurs of our generation and the inspiration behind a special group of movie-lovers known as Nolanites.

Nevertheless, “Interstellar” is a masterfully-made film.

Many directors would be begging to have this sort of film on their resumes.

Last year’s “Gravity” had a similar narrative issue, but it still blew me away.

This movie is a definite must-watch, because it is one thrilling ride into space that you may not get again.