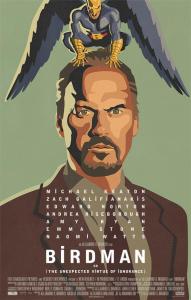 Director Alejandro Innaritu delivers a witty and intelligent film about a washed-up actor trying to relive the days of his youth: movienewz.com photo

I usually try to refrain from labelling films masterpieces after the first viewing, but after seeing “Birdman,” I cannot resist.

Director Alejandro Innaritu’s new film, which stars Michael Keaton, is a witty, thoughtful and dazzling satire of the film and Broadway industries.

Deep down however, it is an intelligent character study of one man trying to relive the glory days of his youth.

The film follows the life of former cinema superhero, Riggan Thompson (Keaton), a washed-up movie star who decides to write, direct and star in a Broadway play of his own creation, hoping his creation will prove he is a real artist and not just a used-up former movie star.

The road to achieving this is paved with major problems with his daughter, co-star and most importantly, his inner demons.

Michael Keaton, who stole everyone’s hearts as Batman in 1989, gives a bravura performance in this role.

One interesting fact about this film is that its concept is loosely based on Keaton’s real-life career.

From his performance, it is very clear that the subject hits home with him.

This is a career peak for Keaton, and I am truly confident that come awards season, he will be nominated for an Oscar for Best Actor.

Edward Norton, who plays a pompous, insolent stage actor, is also one of the best parts about the movie, delivering a powerful performance.

The film is packed with so many existential themes and symbols, and it elevates the film to the pantheon of modern masterpieces.

Innaritu does a masterful job of examining the self-delusions of achieveing celebrity statue and the basic human need to be loved and feel important.

The film is also surprisingly funny for the most part, and there are certain real-life references and meta-jokes that will leave you snickering.

Overall, this movie exceeded every expectation that I had.

Starring talents such as Michael Keaton, Edward Norton, Emma Stone, Zach Galifianakis and Naomi Watts, “Birdman” is a cinematic tour-de-force, and it is ,in my opinion, one of the best film of 2014 thus far.

Expect to see this film rack up a lot of Oscar nominations come February.