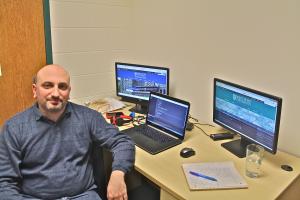 Salina Bowe photo: Recent Mercyhurst University graduate Aaron Williams has been influential in redesigning the school’s website.The Marketing and IT departments, along with a few faculty members, have collaborated to create new tools for potential incoming students.

On Monday, Nov. 17, the Mercyhurst North East website got a major facelift. IT and the Marketing departments have been working since April to make this a reality. Aaron Williams, who graduated from Mercyhurst this past spring, is in charge of the IT portion of it.

Williams said one of the main goals of the project is to make sure the website shows every side of the community.

“[The goal is] making it so more people are involved. I don’t know what goes on in Financial Aid or the Intel Department. People who are involved in those departments are better suited to write content for that website than I am,” said Williams. “I got my degree from here, so hopefully I can represent the student voice as well, being that I just graduated.”

Chris Norris, social media director for Mercyhurst, also wants the website to be reflective of all the different aspects of campus.

“If you look at the home page, we want it to tell a story of Mercyhurst North East on first impression. So we want to show a lot of diversity in its students and what we offer them,” Norris said.

The new site will have several new functions, including a Twitter feed, pop up YouTube videos, and links to different pages which show localized information such as the police academy, a Veteran in the navy becoming a chief, and a dining series the culinary students host. The Mercyhurst Main Campus website has been running these functions for the past three months with much success.

“For the past almost three months, the university site has been performing very well. The analytics have been very good, people like it, but the North East site has not been transferred over yet from the old look to the new look,” Norris said.

All of the departments involved hope this new look will help become a recruiting tool to bring more students to Mercyhurst.