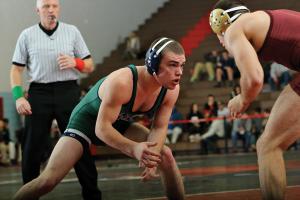 The Lakers headed into the weekend 14-1 in duals and 4-0 in the Pennsylvania State Athletic Conference (PSAC). Coming off of a 47-0 win over Millersville on Friday, the Lakers beat Shippensburg 30-12, and regional opponent American International College 48-0 to improve to 16-1 in duals and 5-0 in the PSAC.

Francis Mizia (157) credits the team’s success to the athletes’ dedication to the program.

“We work harder than any other team” said Francis Mizia, who added that the Lakers plan on being first in the country. Their hard work and confidence showed this weekend as five wrestlers earned national rankings.

The Lakers’ opening match against Shippensburg began with fourth-ranked nationally 125-pound wrestler Willie Bohince. Shippensburg went on to win the next three matches, but was answered by six Laker wins which included a fall by Dakota DesLauriers at 184 pounds and a tech fall by August Mizia at 174 pounds.

The Lakers travel across town Wednesday to face Gannon University at 7 p.m. Following Wednesday’s match, the Lakers will face one more PSAC opponent, University of Pittsburgh at Johnstown. UPJ is ranked 19th in the nation and are 4-1 in the conference.