His essay, titled “Cognitive Dissonance, Envy, and the Psychological Roots of Anti-Liberalism,” will compete this year with students from colleges and universities across the country and around the world for cash prizes that go up to $1,500. 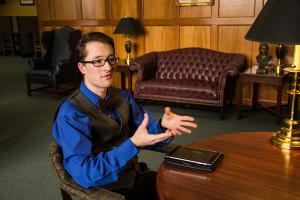 Tung Vu: Junior political science major Zachary Yost will present his essay at the Austrian Student Scholars Conference later this month.
The conference will be hosted by the Ludwig von Mises Institute, an educational institution devoted to the ideals of Austrian economics and classical liberalism.

Yost found out about the conference when it came across his Facebook newsfeed as part of the Mises Institute blog. He decided to apply his senior thesis once completed. After finishing it over the J-term, he submitted it on Jan. 15 and was accepted just two hours after submission. The achievement was no surprise to Yost’s thesis advisor, Chair of the Political Science Department, Michael Federici, Ph.D.

“He hustles, he works hard, he has a very strong work ethic and he is undaunted by challenges,” said Federici. “He seems to have endless energy to get involved in things and even to be the person who is responsible for them and organize them.”

Yost, a Political Science major with minors in history and Economics, follows the principles of libertarianism or classical liberalism (described as liberalism in his essay). Libertarianism is the ideology that people should be free to do live their lives completely free from interference as long as their actions do not violate the freedom and property of others, according to Yost.

Yost’s essay looks at what motivates anti-liberalism and explains how the sentiment of anti-liberalism by groups such as progressives, is a result of cognitive dissonance and envy.

In the essay, Yost claims that anti-liberalism rises when attempting to reduce dissonance created by an inability to cope with reality. The way that anti-liberals deal with that dissonance is by believing that they can change the structure of reality. According to Yost, liberalism is about adjusting oneself to reality.

“The new cognition, which is at the root of anti-liberalism, is that humans can change the structure of reality.

“The spiritual sickness, or pneumopathology, will say that I can change reality so that I won’t feel bad about my inability and my inadequacies to change reality.”

Yost plans to continue expanding and editing his thesis with Federici throughout the rest of the spring term. Eventually, he hopes to submit it for publication.

This is not the first time Yost has presented an essay at event of this magnitude. Last year, his paper regarding the role in property right in agriculture in Imperial Russia and the Soviet Union, between peasant emancipation in 1861 to Stalin’s death 1952 was presented to the History honors society, the European East and West Symposium in Pittsburgh and the Students for Liberty and Institute for Humane Studies Student Research Symposium in Philadelphia.

Yost will graduate as a junior this spring and begin working at the Charles Koch Institute as part of its associate program over the summer. He is currently searching for a career through the program at a partner organization, which will include other free market think-tanks and institutions.

Yost is currently the president and founder of the Mercyhurst Liberty League, a student club promoting free market and libertarian ideals.