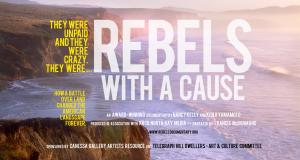 “Rebels with a Cause” will be playing at Taylor Little Theatre.: rebelsdocumentary.org photo

Though piles of snow continue to fall on our beautiful campus, this week’s movie at Taylor Little Theatre will make digging out your car worth the trouble.

The film, “Rebels With a Cause,” tells the story of a regional California effort that grew into a system of 14 National Seashores — the result of garden clubs, farmers, conservationists and volunteers working together through compromise and negotiation.

Unconvinced by land developers who promoted residential construction as progress, citizens began banding together to preserve open spaces for parks and farms — and took the fight all the way to the White House.

This film illustrates a fascinating example of a hard fought campaign to preserve something important to all of us — our public land.

It is a powerful tool to illustrate that the personal is political, and the local is global.

“Rebels” is a feel-good cinematic experience that conveys an inspiring truth about how ordinary individuals have the power to change the rules.

The film was shown at the Ecofalante Environmental Film Festival to great appeal.

The filmmaker will be present for a discussion following the film, so be sure to stay after for a chat.

Tickets are available at Taylor Little Theatre and are $1 for students with their Mercyhurst student ID.