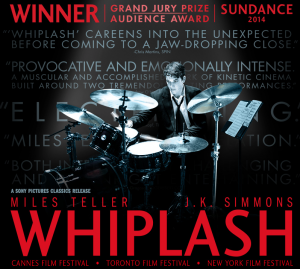 “Whiplash” will thrill audiences with its acting and direction.: cinercia.es photo

Once a year, there are a few independent films that blow critics and audiences away.

One such film is the new movie, “Whiplash.”

“Whiplash” tells the story of a jazz drummer, played by Miles Teller, who strives to be like his idol Buddy Rich.

The road to achieving this is heavily paved with just one obstacle, his fearsome teacher Terrence Fletcher, played by J.K. Simmons.

There are many parts of this movie that make it so great.

Director Damien Chazelle directs this jazz movie with the tenacity of an action movie director.

Miles Teller gives it his all in this film with his performance as Andrew Neiman being enchanting, yet relatable.

He portrays the strife that many people go through to be the best at what they do.

The best part of this film, however, is J.K. Simmons.

His performance as a jazz teacher who pushes his students beyond their limits is so riveting, and entertaining, yet scary at the same time.

“Whiplash” is everything expected from an independent movie; inspiring, intimate and genuine.

This contender for the Academy Award for Best Picture is without a doubt one of the best films of 2014.