Stealing Summer is a four-piece band made up of brothers Landon and Grayson Smith, Brad Hutcheson and Jon Taylor.  Since forming in 2006, they have been touring and promoting non-stop, in hopes of releasing a full-length album this year.  Their first single, “Between You and Me,” is currently available for download on iTunes and the band’s MySpace page.

Sun Domingo is a progressive rock trio.  Much of the band’s appeal is their lethal combination of melodic guitar, introspective lyrics and timeless pop hooks.  This combo is also responsible for the band’s diverse fan base.  They are currently touring in support of their 2008 full-length debut, “The World’s Alive.”

Taking Chances is a pop/rock band made up of Gerard Canonico, who was a cast member of the Broadway musical Spring Awakening from 2006 to 2009 and brothers Chris, Nick and Joe Salerno.  Taking Chances’s music has noticeable ska, reggae and acoustic influences and is also upbeat garage band music.  Taking Chances released their self-titled debut in 2008.

Tinted Windows is an alternative rock supergroup and pet project.  The four band members come from such diverse acts that it automatically stirs curiosity.  Tinted Windows features Taylor Hanson from Hanson on vocals, James Iha from Smashing Pumpkins on guitar, Adam Schlesinger from Fountains of Wayne on bass and Bun E. Carlos from Cheap Trick on drums.  Their debut album was released this past April.

Phoenix-born brothers Josh and Dan Ballard started writing songs together in high school, then began playing in bands while in college at ArizonaStateUniversity.  The brothers eventually moved to Los Angeles, where they found drummer Daniel Dempsey in 2005, completing Until June.  After countless shows and lots of self-promotion, the band declared it make or break time, stating they had “until June” to get themselves recognized by a label.  Ironically, they inked a deal that June and released an EP on iTunes a few months later.  Their self-titled full-length debut is available now.

Although Ume’s debut album was released in 2005, their showcase at this year’s South By Southwest (SXSW) festival proved them to be a real contender in the competitive music industry.  Fronted by an unassuming Lauren Larson, Ume’s sound straddles the line between catchy ’90s alt-pop and dark, psych-infused ballads.  They have been compared to the Yeah Yeah Yeahs and Sonic Youth, but their “Sunshower” EP puts them in a class all their own.

Van Atta High began as five friends in New Jersey.  They put out their first EP, “We are the Captivated,” in 2006.  The band, which is named after the fictional high school from the TV show “Full House,” made its way around the New Jersey pop/punk circuit before making their national debut.  Van Atta High was invited to join the 2007 Vans Warped Tour solely due to internet traffic and dedicated fans.  Their newest EP is entitled “Run Like Hell” and is available on iTunes and CDbaby.

Vedera is an indie rock quartet originally called Veda. The band then had to re-release their debut album, “The Weight of An Empty Room,” under their newfound handle.  In support of the album, they toured with such acts as Mute Math and Underoath.  Their latest release, “Stages EP,” is available now.  Vedera is currently touring with the Plain White T’s, All-American Rejects and labelmates The Fray.

Wheat is the epitome of low-key.  Their dreamy, shoegazing music style is perfect for lounging around on a sunny day.  Wheat released their debut album in 1998, a follow-up in 1999 and then took a break.  They also released albums in 2003 and 2007.  Even with four releases, Wheat still remained under the radar, but maintained their independent fan base.  This year, the band decided to re-release their ’90s albums in anticipation of their new spring release.

WAZ is the solo project of Pete Yorn’s former guitarist.  WAZ picked up a guitar at age eight and never looked back.  After touring with Pete Yorn for a few years, the Cleveland-based singer/songwriter recorded a solo effort, “The Sweet Bye and Bye.”  His songs have been featured on “Grey’s Anatomy,”  “The Hills,” and “Weeds.”  Last summer, he released “The Secret EP” and hopes to follow it up with a full-length in summer 2009.

XO is the side project of Jake and Jeff Turner of Say Anything.  Last year, the brothers self-released a six song EP entitled “Some Day.”  The EP features both brothers taking turns on vocals, guitar, bass and keyboard.  Jeff Turner played drums on the recording.

Xavier Rudd is a very unique Australian musician.  His sound is very earthy and soulful and his live shows include strange stage setups and multitudes of instruments.  Rudd, whose influences include Ben Harper, Natalie Merchant and Paul Simon, plays streamline instruments like the guitar, shakers and harmonica, as well as not-so-mainstream ones like the didgeridoo, stomp box and djembe.  He plays multiple instruments during each song, making for a full band show with one musician.

Y is for…Young Republic & You Me At Six.

YoungRepublic is a Nashville-based band who started out last year when they signed a record deal in the UK.  While touring the UK in support of their debut album, three of the band’s members stormed out, leading to betrayal, bitterness and awesome songwriting.  A year later, the remaining members have been working on new material and are looking forward to their first US album, Balletesque.

You Me At Six started out like most bands.  Made up of five friends from London, You Me At Six (YMA6) played in garages and at house parties for a few years until MySpace helped them grow their UK fan base.  Since 2007, the band has been touring with bands such as The Audition, Fall Out Boy, Angels & Airwaves and New Found Glory.  This year, fresh off their showcase at SXSW, You Me At Six will play select Warped Tour dates in support of their newest release, “Take Off Your Colours.”

The Zutons formed in Liverpool in 2001, but didn’t release their debut album until 2004.  The album was critically acclaimed, earning the band a Mercury Music Prize nomination.  In 2006, The Zutons released their sophomore effort, which featured two hit singles, one of which was covered by Amy Winehouse.  The Zutons’ most recent release, “You Can Do Anything,” came out in 2008.  In late 2008, the band was dropped from Sony/BMG and their future is currently up in the air.

Zack Hexum is a singer/songwriter from Los Angeles and the younger brother of Nick Hexum of 311.  Hexum, who plays both guitar and saxophone, released his debut in 2004.  In 2006, his single “How Many Times” was featured as an iTunes Single of the Week.  His most recent album, Open To Close, was released in 2007.  Zack Hexum is currently working on a few movies and television shows, scoring and ghost-writing music. 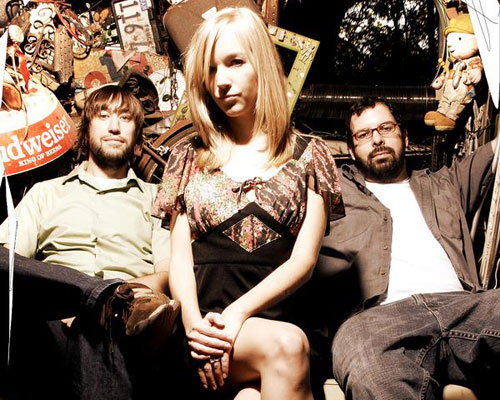 Ume is led by Lauren Larson with an alternative pop sound.