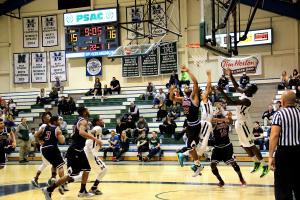 “The play was designed for me. When the clock came between six to eight seconds, the ball was meant to be in my hands. My teammates did a good job of putting me in a great position to shoot. I kept pushing the ball really hard and that is why it banked off the glass. I didn’t realize at first glance that it went in. It was crazy and it made me so happy,” Onana said.

The Crimson Hawks, ranked No. 16 by the NABC, fell to the Lakers for the second time this season. With this win, the Lakers are just a game back of Gannon and Indiana in the PSAC Western Divisional championship race.

Before the matchup, Mercyhurst’s head coach, Gary Manchel, broke down the keys to victory.

“There are a couple things we have to concentrate on defensively, keeping them off the offensive glass, as they are one of the better rebounding teams in our league, and avoid giving them open shots from three point range, especially from Devonte Chance, Shawn Dyer and Jeremy Jeffers,” Manchel said.

Even though they got off to a slow start as IUP gained a quick 9-2 lead, the Laker’s fulfilled their coach’s requests.Dailey, senior Terrance Ingram, and redshirt junior Gerrae Williams sank 3-pointers to quickly jump back and take the lead 11-9 after a much needed 30 second timeout.

Going in to the half, Mercyhurst trailed IUP 26-25. The Lakers came out after the half strong on a 9-1 scoring run.

Onana was the only player to score in the double digits, tallying 11 points.

The Lakers posted stellar numbers from beyond the arc, shooting 7-11, their highest shooting percentage from three this season.

Mercyhurst improved to 17-7 on the season and 14-5 in the PSAC. IUP fell to 20-4 overall and 14-4 in the PSAC. On Wednesday, Mercyhurst will travel to Johnstown, Pa., to play against University of Pittsburgh at Johnstown. Tipoff is at 7:30 p.m.