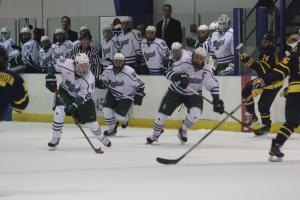 The Mercyhurst men’s hockey team continued its winning streak over the weekend by sweeping Niagara University at home.

The Lakers started off the weekend with a 5-2 win on Friday. They continued their success by outscoring Niagara 4-1 on Saturday, increasing their winning streak to four games.

During Friday’s game, the Lakers found the back of the net twice within two minutes of each other.

Red shirt freshman Jack Riley started it off with a goal from freshman Zach Todd and sophomore Kyle Dutra.

Senior Zac Frischmon put the Lakers up 2-0 by capitalizing on a pass from seniors Ryan Misiak and Nardo Nagtzaam.

Niagara came back to tie the game with a power play goal in the first period, and another goal in the second.

The Lakers took charge by scoring three unanswered goals to push past Niagara.

Senior Matthew Zay scored the game-winning goal at the end of the second period. Zay’s goal was assisted by seniors Daniel Bahntge and Kyle Just.

Zay and Bahntge assisted Todd in his first collegiate goal, giving the Lakers a 4-2 lead.

Seniors Grant Gettinger and Just assisted Zay for his second goal of the night to end the game at 5-2 Mercyhurst.

In the second game played on Saturday, senior Tyler Shiplo started the scoring off with a goal from Misiak and freshman Jonathan Charbonneau.

Thirty-three seconds later, Charbonneau capitalized on a pass from newly-acquired freshman Michael Verboom and Misiak to give the Lakers a 2-0 lead over Niagara.

To close the first period out, Just scored his first goal of the game assisted by Bahntge and Zay.

Niagara scored its only goal of the game at 2:42 in the second period to make the score 3-1, Mercyhurst.

Thirty-six seconds into the third period, Just notched his second goal of the game. The goal put him two points away from becoming the fourth men’s hockey player this year to record 100 career points.

Freshman goaltender Brandon Wildung picked up both wins this weekend and saved 46 of 49 shots.

During the last four games, Wildung has allowed only four goals on 94 shots.

Wildung attributed his success in net to his teammates.

“If I let a bad rebound out or something like that, the guys are out there getting it out or tying guys up. The guys really helped when I needed it,” Wildung said.

Wildung’s 46 saves this weekend earned him the title of Travel Team USA Goaltender of the Week by the Atlantic Hockey Conference.

Zay also earned Travel Team USA Offensive Player of the Week with his two goals and two assists over the weekend.

The men improved their record to 16-10-4. This puts them in a tie them for second place with Bentley University.

The Lakers match-up with Canisius College at home Friday at 7:05 p.m. for their last home game and senior night. They will then travel to Buffalo Saturday for a second game against the Golden Griffins, beginning at 7:35 p.m.

Before heading to the playoffs, beginning March 6, Mercyhurst will travel to Rochester Institute of Technology (RIT). Their last games will be played Friday, Feb. 27, and Saturday, Feb. 28. Both games begin at 7:05 p.m.