Fencing Club President Nadia Robtoy is excited about the club’s growth potential and hopes that new events will encourage more participation among the Mercyhurst student body.
“We actively seek to serve the Mercyhurst Mission and be a part of the community,” said Robtoy. “We do a lot of demonstrations.”

Under Robtoy’s leadership, the club has visited the Mercy House, the Veterans Administration and youth improvement centers to promote the benefits of fencing and to entertain audiences. 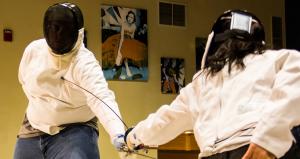 Tung Vu photo: Fencing Club members get experience dueling every week in the Student Union Great Room in full fencing gear provided by the club.
“We like to give back to the community,” said Robtoy. “Who doesn’t like stabbing people?”

She has been a part of the club since her freshman year, having had previous experience in competitive dueling in middle school. She is now also the club’s saber instructor.

“We accept a wide range of members,” said Griffin. “Don’t be afraid to come and join us.”

Interested members do not need to worry about the financial cost of fencing with the club.

“The club provides all the equipment and we teach at a level for beginners and beyond,” Griffin said.

Fencing is also one of Griffin’s favorite cardio exercises during the week.

“I love coming here to relax and release stress,” she said.

While clearly physical, fencing is also an intellectual workout, according to Griffin.

“I watch fencing matches to get tips on strategies,” said Griffin. “Instinct is great, but the best fencers know what is coming and can read their opponents.”

Junior Claire Manley, a recent addition to the club, joined the group last Tuesday. Manley was motivated to join by the opportunity to meet new friends and spend time with old ones.
“I’d heard so much about it that I just had to try,” said Manley. “It’s a great way to lower stress.”

The Fencing Club rotates their weekly lessons between Tuesday, Wednesday and Thursday evenings in the Student Union Great Room.