Nearly 25 percent of Erie’s population today lives in poverty, a figure that dredges up images of the Great Depression of the 1930s.

As part of its yearlong examiination of the Depression, Mercyhurst College presented a panel discussion on “Lessons and Legacies of the Great Depression” on Thursday, Oct. 29.

Riley-Brown began the discussion by examining the “images and icons” of the Great Depression.

Argaez followed this discussion with an exploration of how economic thought influenced behavior. 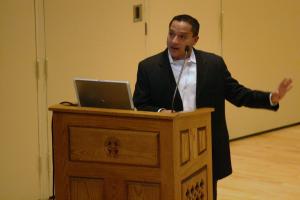 Ethan Magoc photo: Dr. Juan Argaez spoke at the panel discussion, “Lessons and Legacies of the Great Depression,” on Thursday, Oct. 29. This discussion was part of the yearlong series, “Fear Itself: The Great Depression, New Deal and Today’s Search for Economic Security.”

By exploring Neoclassical Theory, Keynesian Theory and other economic trends of the past 130 years, Argaez demonstrated that economic behavior comes in cycles of demand-side and supply-side economics. By studying these cycles, an economist can use the Great Depression as a model to examine today’s recession, Argaez said.

According to Olszowka, New Deal policies brought about a “transformation of the American working class.” This time period saw the rise of worker unions, which became recognized by the government under President Franklin D. Roosevelt.

After World War II, per capita income jumped and unions continued to thrive. In effect, the working class evolved into the middle class of today, Olszowka said.

Not only did the dynamics of the working class change, but the “collective mindset about poverty” changed as well, Benekos said. Benekos compared poverty to a coastline. He said, few people care about the gradual erosion of the tide line, or day-to-day poverty, but funds flood in from the public when a tidal wave, or economic disaster, strikes.

Clemons told the audience, “Almost one in four people in Erie live in poverty.”

After comparing the recent recession to the Great Depression, Clemons concluded his presentation by saying, “When this storm hit, thanks to the New Deal, we already had institutions in place.”

Commenting on the other speakers’ presentations, Clemons said, “It’s always interesting to take an interdisciplinary approach to problems like this.”

Hlusko said the discussion was “well-rounded” and that she enjoyed the presentation, particularly the “popular photographs.”

The film, “The Grapes of Wrath,” will be shown on Tuesday, Dec. 15, in the Taylor Little Theatre as the next installment of the yearlong examination of the Great Depression.