The weather is taking its toll on Mercyhurst.

For the third time in its 89-year history, the university canceled classes due to the harsh weather conditions this past Thursday and Friday, which reached as low as -17 degrees.

The school’s water pipes have struggled to hold up, breaking in Audrey Hirt Academic Center’s first floor on Wednesday, Feb. 18, and damaging the computer lab in Room 110.

A water line then proceeded to burst in the Student Union on Saturday, Feb. 21, causing flooding and an evacuation. The snow continues to be a problem for students and employees as well. 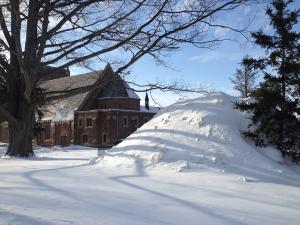 Casey Bleuel photo: Large ‘snow dunes’ have formed near the Hirt Academic Center. The snow piles have reached the top of nearby trees.

“We take it as it comes,” said Brian Jones, who works for maintenance at Mercyhurst. “It’s a non-stop job keeping everything safe.”

Jones said maintenance employees are putting forth their best efforts to prevent further pipe bursts on campus through testing and periodic system shut downs.
“We can’t do it all, but having teams helps lighten the load just a little,” Jones said.

According to Jones, the Maintenance Department has a separate team devoted to snow removal on campus known as the “plow team,” who begin work as early as 4 a.m.

“They have to clear the snow before faculties arrive and students start heading to class,” said Jones. “I don’t mean to complain. This time of year is probably the hardest for us. Most people get to go home or work inside. We work in the harshest elements.”

Miranda Miller, a history major, is weary of the walking conditions on campus.

“There’s a lot of ice all the time,” said Miller. “It’s dangerous.” 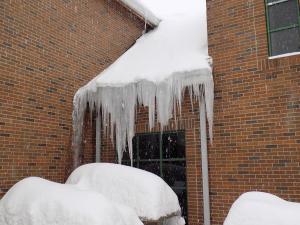 Jonah Jackson photo: Large icicles hang off the side of the Sister Carolyn Herrmann Student Union. The Student Union was evacuated on Saturday, Feb. 21, due to a water line break.

“You can tell they put a lot more effort on the paths for tours,” Miller said.

Art Therapy major Shelby Grundy, said that the University’s handling of the snow has been adequate.

“Show removal could be better, but it’s fair enough,” said Grundy. “Whatever they are doing is not quite working, though. It would be nice to see some regularity.”

Derek Mattson, majoring in Elementary Special Education, spoke from the point of view of a tour guide.

“As an Ambassador, I assure you that tour paths aren’t as shoveled as they appear,” Mattson said.

Some students are not sure of a solution to the snow problems around campus.

“The problem is, there isn’t a place to put the snow,” James Duncan, a Criminal Justice major said.

Outside the Hirt Academic Center, large “snow dunes” have accumulated on the sides of the road. They stand taller than some trees.

“There is only so much they can do,” said Joe Rieger, who is majoring in Intelligence Studies. “They are doing their best.”

Mattson said that other service maintenance provides students have been beneficial as well.

“Their online request service is immediate and really great,” said Mattson. “They are really helpful.”