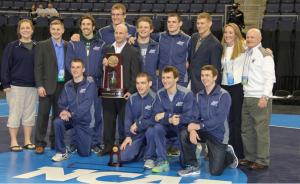 Contributed photo: The wrestling team poses with their fourth-place trophy after the tournament.

The top finisher for the Lakers was 174-pound redshirt junior August Mizia with his best finish at national level, placing third. In addition, Mizia received his first All-American honor.

“The mental asset is the greatest thing to have in the tournament. It’s easy to see the finish line and coast to the end of the season, but you have to stay focused and your head has to be in it,” Mizia said.

However, it is not all about the individual success according to Mizia.

“The starting ten don’t get better without the other twenty behind us,” he said. “We hang our hats on hard work, day in and day out that’s what we want.”

Laker heavyweight sophomore Andrew Welton had the next highest finish, placing fifth in the nation. This was his second appearance at the national tournament, but his first All-American honor.

Mercyhurst had three wrestlers place sixth at the tournament.

This year’s finish was also accompanied by All-American honors and the award for most wins by technical fall across all of Division II this season.

Head Coach Mike Wehler added to his title of Super Region I Coach of the year earning the honor of NCAA Division II National Coach of the Year.

All-American honors, this year’s best ever fourth place national team placement, as well as a number of impressive academic achievements.

Out of the seven national qualifiers, there were no seniors, making for an experienced lineup next season.