‘It Happened’ in Taylor Little 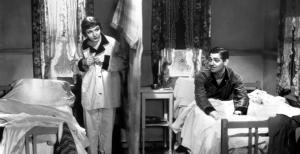 The classic film “It Happened One Night” will be playing on Sunday in Taylor Little Theatre.: miac photo

Even though the weather seems to be warming up, it is always a treat to escape reality for a while and watch one of the Sunday afternoon movies in Taylor Little Theatre.

This week, the Sunday movie is an old classic, “It Happened One Night,” starring Clark Gable and Claudette Colbert.

The 1934 film has been described by numerous critics as “one of the greatest romantic comedies in film history, and a film that has endured in popularity.”

Claudette Colbert plays a pampered socialite who runs away from her disapproving family and gets help from a roguish reporter, played by Clark Gable, who is only looking for a new story to scoop.

The escapist theme of the film, appropriate during the Depression Era in which it was made, follows their story and the unlikely romantic pairing of a snobby heiress and a gruff, indifferent and recently-fired newspaper reporter.

The film contains some of the most classic scenes ever made, such as the “Walls of Jericho” scene, the doughnuts-dunking lesson and the dramatic wedding scene.

Co-written and directed by Frank Capra, “It Happened One Night” went on to receive Winner of Best Picture, Director, Actor, Actress and Screenplay at the 1934 Academy Awards, and from then on was regarded as one of the most cultural films of all time.

The film will be shown this Sunday, March 22, at 2 p.m. in Taylor Little Theatre.