Men's basketball falls in first round 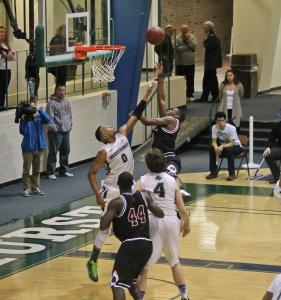 The Lakers received an at-large bid after losing in the Pennsylvania State Athletic Conference (PSAC) quarterfinals against top-ranked Indiana University of Pennsylvania. Winners of the conferences received an automatic bid to the championships while NCAA Division II Men’s Basketball committee chose the other 42 teams.

Mercyhurst’s first game in the tournament was against Fairmont State University which was also their first opponent of the season. The Lakers fell to the Fighting Falcons, 68-63.

Callon Dailey gave the Lakers their first points of the game with his only 3-pointer of the night. Dailey led the team in scoring with 10 points.

However, Fairmont State fought back and kept the Lakers from having more than a 4-point lead throughout the entire first half.

Mercyhurst outscored Fairmont State in field goals and 3-pointers, 13-11 and 3-2, respectively, in the second half. However, they sent the Fighting Falcons to the foul line 16 times with 13 of those shots made. This gave Fairmont the advantage.

The Fighting Falcons took their largest lead, 11 points, with four and a half minutes remaining in the game. Mercyhurst did not accept defeat and went on an eight point scoring run.

Although Mercyhurst did not make it to the second round, they did make program history.

“Anytime you are the first is monumental,” Head Coach Gary Manchel said.

The team finished 20-9. Manchel said Mercyhurst will be one of the top teams next year with 12 members returning.

With a winning record and NCAA playoff berth, Manchel was named PSAC Coach of the Year.

“I’m not big on accolades, but it’s nice to receive,” said Manchel. “It just emphasizes what my assistant coaches and players have done.”