Student keeps the beat around campus 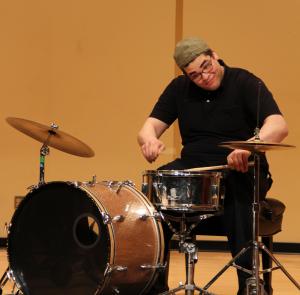 Senior Percussion major Micheal Hibbler II has been drumming up success at Mercyhurst with a wide range of musical projects.

With a passion for music, Hibbler has displayed his talents in several ways during his time at Mercyhurst, including as an active member of the Mercyhurst Jazz ensemble, a member of the student band The Monk’s Brew and the Percussion Director for the Mercyhust Pep Band. He has also been a part of various Mercyhurst Musical Theater programs, as well as a local rap group, Hollahou$e.

Hibbler has a history with music, having started playing the double bass in first grade. After moving to Erie, Hibbler attended Glenwood Elementary School, where he started playing percussion, an interest that has stuck with him ever since. He went on to become part of the Erie Junior Philharmonic and the Prelude Orchestra in Erie for a year.

During high school, Hibbler performed in the Erie All-City Marching Band, which won best percussion in every competition, including championships for five years straight.
“That’s a pretty big achievement in my life,” said Hibbler. “I continued to play percussion in school. In high school I started to play jazz, which inspired me to take music in college.”
After almost 12 years of playing percussion, Hibbler is keeping his passion alive in college.

“Although I have a lot to learn, Mercyhurst has the program that can get me to where I want to be,” Hibbler said.

As member of The Monk’s Brew, a student band formed in 2011 with fellow seniors Dillon Shidemantle, Bobby Lucas and Alex McLaughlin, Hibbler has helped make six complete original songs. The band has performed in places around Erie, including the Brewerie and the Erie Art Museum. By the end of the school year, the band plans to release an original song and a music video.

Hibbler is also the drum set player in the Mercyhurst Jazz ensemble. He has also played music in three different Mercyhurst theater productions including “King Arthur,” “Urinetown” and most recently, “You’re a Good Man, Charlie Brown.”

When not drumming, Hibbler raps with the Erie-based rap group Hollahou$e.

“Me and my buddies running around up to no good, we were just really into hip-hop,” said Hibbler. “It started off with making beats, to putting obscure rhymes over them.”

Hibbler performed in the group for fun, which eventually led to meeting and collaborating with fellow Mercyhurst student, junior Communication major Alan Abramek.

In the spring of 2014, Abramek produced the original song, “It’s Going to be a Good Day,” in collaboration with other Mercyhurst students, including Hibbler, who wrote and rapped a verse.

Abramek’s father, a music producer in Poland, heard the recording and hired Hibbler to write and record a verse for a Christmas carol.

“It was on the radio and everything,” said Hibbler. “It was kind of cool getting paid to do something I enjoy.”

Hibbler is currently working on an original demo rap tape. It will have original produced beats, which he plans to release next year. He also plans to continue making music and performing with The Monk’s Brew.

“I’d like to grow up and be a famous drummer,” said Hibbler. “I’d honestly like to go to graduate school for drumming learn, graduate and make a living. I’m not a skeptic. I am a realist; I know that that dream is far-fetched. I can play out every weekend, but am I going to make a living? That’s the hard part.”

Hibbler plans to attend Gannon University for Occupational Therapy after he graduates from Mercyhurst next fall.