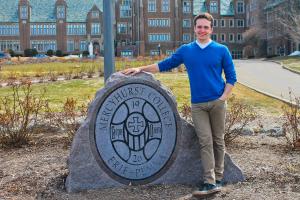 He will officially be sworn in on April 27. Ohmer ran unopposed on the ballot for MSG president. A member of MSG since his freshman year, Ohmer plans to introduce changes to club finances and keep the organization “moving forward.”

Ohmer, a native of Saegertown, Pa., was unsure about what he wanted to study when first coming to Mercyhurst. He tried out various majors including Intelligence, Biology, and Business before his love for politics and reading led him to major in Political Science and English.

Ohmer’s first experience with leadership was during high school, when he became part of Student Council. This experience stirred his interest in leadership roles within Student Government.

“I really love the idea of Student Government,” said Ohmer. “I like to be active. I like to do things. I like to know that I have a role in changes on campus and things in my community.”

Ohmer became part of MSG in 2012 as a freshman senator. During his sophomore year, he worked as the Public Relations Coordinator, where he was the first to implement a day planner, and worked making posters and writing press releases for MSG. During the 2014-15 academic year, Ohmer was elected to his current role of vice president.

As the vice president, Ohmer has attempted to implement various changes around campus. He has worked closely with the Recognized Student Club Organization (RSCO), implementing a monthly newsletter and organizing luncheons with RSCO clubs in an effort to acquire more feedback on MSG from the student body.

Ohmer also added various amendments to the MSG constitution, such as the creation of a Multicultural Activities Council (MAC) chair, a response to the growing multicultural community at Mercyhurst, said Ohmer.

Ohmer attributes his enthusiasm for leadership roles as an inheritance from his immediate family. Having seven older siblings has given him numorous role-models when making choices, according to Ohmer. He also said that his parents have always been very supportive of everything he does.

“My mom is an idea person and she is always coming up with new things to do. She is full of energy,” said Ohmer. “Like my mom, I get really interested in things, learn about them and I try them out.”

For now, Ohmer will shadow current MSG President Latta to learn about what the position he will assume entails. His only worry is that the organization may lose its momentum going into next year.

“I get in contact with a lot of clubs and what I’ve noticed for the clubs is that every time they change leadership and the new year begins, it’s like they are restarting and I feel like I don’t want that to happen to Student Government. I want to just keep going forward,” Ohmer said.

As MSG president, Ohmer hopes to introduce more changes around campus. He hopes to incorporate the MSG event’s iCards onto the student OneCard, so students will able to use their student IDs as a substitute for the paper cards currently being used. Ohmer also hopes to find a way to increase the RSCO budget, so clubs are able to host more activities.

“It’s annoying when clubs can’t do what their club is based on,” said Ohmer. “For example: a martial arts club. If they don’t have a punching bag, how are they going do to martial arts? Not necessarily equipment, but I hope to increase the budget so clubs are able to go to more events and conferences. It’s kind of a restricted budget and I want to find a way to expand it.” Ohmer said he hopes students more students will consider joining MSG next year.