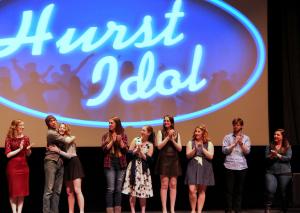 Nhi Tran photo: Participants at SAC’s third annual Hurst Idol learn the results after the audience texted their votes for their favorite performance. Dhedra Danudoro and Eva Sullivan embrace as they are awarded the title.

With over 350 people in attendance, the event drew what was estimated to be its largest crowd in the three years it has been hosted. Judges Rhonda Blount, Jenna Dascanio, Michael Grasso and Trina Marrero reviewed six diverse performances by Mercyhurst student participants in the show as junior Sam Beckas and senior A.J. Zahuranec hosted the program.
Participants submitted audition tapes to SAC’s email, which were then reviewed and chosen by SAC. The winners of the evening were then chosen by popular vote, as audience members were asked to text in their favorite performance.

Junior Dhedra “Danny” Danudoro of Indonesia and Eva Sullivan of Meadville, Pa., took home the title of Hurst Idol after an acoustic duet of a mash-up of Maroon 5’s two hits, “This Love” and “She Will Be Loved.” Sullivan sang lead vocals as Danudoro played guitar and sang backup.

The choice of music was directly influenced by the band, according to Danudoro.

“We started out looking for a band that no one could hate,” said Danudoro. “And no one hates Maroon 5.”

The choice apparently paid off for the duo, who had a large fan base that brought their own signs to cheer them on. The judges likewise supported their decision and process.
“I agree,” said Marrero, a first time judge of the event. “You had me at Maroon 5.”

Nhi Tran: Maggie Doherty sings Adele’s “One and Only” in the final performance at this year’s Hurst Idol.

Danudoro said he was most concerned about the transition between the two hit songs during their performance.

“I was so worried,” said Danudoro. “My legs were shaking.”

During rehearsal for their performance, Danudoro and Sullivan had an unexpected guest.

“We were practicing at Taylor Little Theatre and during a break, we heard someone yell through the wall ‘Sing it louder,’” said Danudoro. The hidden critic turned out to be Joseph D’Ambrosio, who visited Mercyhurst Thursday, March 19, to talk about his experience being exonerated from death row.

In addition to the performances, last year’s winner, junior Austin Hembree, returned for an encore performance of “Stubborn Love” by the Lumineers as audience members texted their votes.

Also performing in the event was Sarah Gravante who performed “Rolling in the Deep” by Adele, Hannah Devlin with “Don’t Know Why” by Nora Jones, Ania Jaskowiak with “Thank you for the Music” by ABBA, Emily Dallemore with “Vertrau in Uns,” Brianne Colligan with “Ours” by Taylor Swift and finally Maggie Doherty with “One and Only” by Adele.