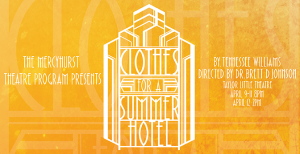 The Theatre Program is performing the Tennessee Williams’ classic “Clothes For a Summer Hotel” as the ending performance of the: miac photo

The Mercyhurst Theatre Program will conclude its 2014-2015 season with the production of Tennessee Williams’ “Clothes for a Summer Hotel.”

Director Brett Johnson, Ph.D., invites audiences to experience the rare opportunity to enjoy one of Tennessee Williams’ last productions to appear on Broadway during his lifetime.

The performances will be held at Taylor Little Theatre Thursday through Saturday, April 9-11, at 8 p.m., and Sunday, April 12, at 2 p.m.

“Clothes for a Summer Hotel” dramatizes a fictional meeting between F. Scott Fitzgerald and his wife Zelda at an Asylum called Highland Mental Hospital outside of Asheville, North Carolina.

Fitzgerald has received word from doctors that his wife, who has been institutionalized and diagnosed with schizophrenia, has made fast improvements.

He hops on the first plane from Hollywood, where he is working as a screenwriter, and goes to Asheville to visit her and finds out that she has, in fact, not been making any improvements as the doctors stated.

In this meeting between husband and wife, there are a series of flashbacks where the audience gains an insight into their plight.

The audience discovers the ways in which Scott stifled Zelda’s creativity by refusing her to publish “Save Me the Waltz” until his “Tender is the Night” had been published.

The storyline suggests that it was because of the extent to which Zelda was repressed by Scott that contributed to her madness.

In these flashbacks, the audience also meets an aviator named Edouard with whom Zelda allegedly had an affair.

Audiences also meet the Hemingways, the Murphys, Mrs. Patrick Campbell and all those other members of the “lost generation” whom the Fitzgeralds rubbed elbows during the 20th century.

Johnson, who has directed three other Tennessee Williams plays during his career, said Williams is one of his research interests and a personal passion.

“Part of my mission is to introduce audiences to those lesser-known works,” said Johnson.

“‘Clothes for a Summer Hotel” is so rarely produced and I think it’s a better play than people give it credit for.”

When the play was first released on Broadway in 1980, it was greatly dismissed by both critics and audiences.

According to Johnson, the director at that time did not make the right decisions to make the play successful and the script was not in its final form, along with many other elements that ultimately made the production a flop.

Williams later revised the play and published a final version, which is the one being used for this production.

Johnson describes the play as a haunting project that has challenged all those involved in its production.

“I said to the cast, ‘I want you all to realize how fortunate you are to be able to say these words on this stage. I hope you get to do another Tennessee Williams’ play in your career as actors, but I doubt you’ll have an opportunity to do this one,’” said Johnson

“Is it his best work? No, but even second rate Tennessee Williams is better than other playwrights’ best. I think it’s a better play than people have given it credit for.”

He invites audiences to come watch the play, because they would have a hard time finding a production like this one again.

“I would guess that at some point of one’s life you could probably see a production of “A Street Car Named Desire” or “Cat on a Hot Tin Roof,” but you’d be hard-pressed to find a production of “Clothes for a Summer Hotel,’” said Johnson.

To reserve your tickets today, call 814-824-3000 or by visiting the box office, located in the lobby of the Mary D’Angelo Performing Arts Center.

Tickets will also be on sale at the theatre, beginning one hour before curtain.

Doors open 30 minutes prior to curtain.