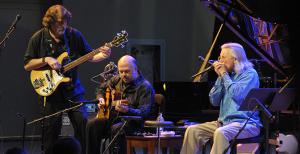 This Thursday at 7:30 p.m. in the Mary D’Angelo Performing Arts Center, musician Chris Brubeck will take center stage with his group, “Triple Play,” and lead them in an epic sojourn through American music.

Brubeck’s group, which will grace the PAC stage six years since Brubeck’s own father did, is unlike any other band on the scene.

As part of the performance, they will be discussing their performances with Dave Brubeck through the years.

Chris Brubeck first entered the music scene as an innovative rock and jazz musician, before eventually recording and performing with his father, musician Dave Brubeck.

Chris is a highly sought-after composer, and in the last few years, has been commissioned to write many innovative works of music.

2013 had seen the premiere of two new children’s pieces written by Chris, titled “The Hermitage Cats Save the Day,” a Russian-American cooperative project about the cats in the Hermitage Museum, featuring visuals, musicians and actors.

He plays bass, trombone, piano, guitar, sings and has earned international attention as a composer, performer and leader of his groups, “The Brubeck Brothers Quartet” and “Triple Play.”

Chris’s most recent thrill was performing with his brothers, Darius, Dan and Matthew, in an all-star tribute to their father, Dave Brubeck, as part of Washington’s Kennedy Center Awards, which was televised internationally in December 2009.

An award-winning composer, Chris’ natural talents have made him a well-known composer for genre-bending modern classical music.

His compositions for artists such as “Time for Three,” Regina Carter and Eileen Ivers have been performed in major concert halls all over the planet.

The Chicago Tribune calls Chris, “A composer with a real flair for lyrical melody – a 21st Century Lenny Bernstein.”

Also called “rollicking good fun” by Mark Swed of the LA Times, the performance of “Triple Play” is bound to be a unique and fun experience for all audience members.

Lavery Brewing Company, the official brewery of MIAC, will be serving beverages before the show, so be sure to arrive early and try out their complimentary tastings.

The performance will be this Thursday, April 2, at 7:30 p.m. in the Mary D’Angelo Performing Arts Center.

Tickets are $50.00 for box seats, which are very limited in availability.