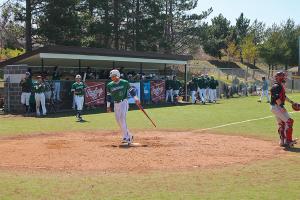 The Mercyhurst men’s baseball team is ranked no. 4 in the country according to the National Collegiate Baseball Writers Association Division II poll.

The team moved from 14th to 4th between April 1 and April 14. The Lakers moved up in the poll after defeating four out of five teams this past week. They are now 28-2 overall and 18-2 in the Pennsylvania State Athletic Conference (PSAC) Western Division.

The Lakers look to continue this success into the postseason with the PSAC championship and the National Collegiate Athletics Association playoffs.

“The team is motivated by the opportunity to play in the postseason and play together as long as they can,” said Head Coach Joseph Spano. “This is a very tight group of people. Not only are they great teammates, but great friends and that makes this team very
special.”

With 31 upperclassmen, the team has experience in the postseason. Last season, the team went to the NCAA Atlantic Regional Finals as well as the PSAC tournament.

“This team is a veteran team, the majority of our guys
are juniors and seniors and they have experience now. They have tasted the postseason and they want to keep playing together,” said Spano.

“They know how to stay grounded, they know how to talk to each other, the maturity, work ethic and leadership of our upperclassman is what the strength of the team is.”

Since starting this season, the Lakers outscored their opponents 180-73. Having a balanced team is important in making this record.

“We build our teams around pitching and defense. For years, we have been among the best in the country in most pitching and defensive categories. This team has a blend of speed, power, plate discipline and timely clutch hitting,” Spano said.

The Lakers are coming off of a three-game winning streak. They split a doubleheader with California University of Pennsylvania away on April 10, and then swept them at home the next day.

“Starting this season I knew we were going to have a great team this year from our pitchers to our position players, so I feel that the sky is the limit for our team,” junior Hank Morrison said.

The Laker’s look to improve their record with a double header on Friday, April 17, at 1 p.m. and 3 p.m. at Mercyhurst against Indiana University of Pennsylvania.