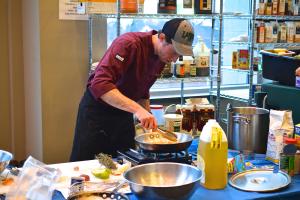 Casey Bleuel photo: Junior Timothy Gilbert puts together a dish at this year’s Mercyhurst edition of “Chopped.” The proceeds from the event went to the Autism Society of Northwestern Pennsylvania.Junior Hospitality major Timothy Gilbert won the second edition of Mercyhurst’s “Chopped,” a student cooking competition that simulates Food Network’s popular cooking show with the same name.

On Tuesday, April 7, Gilbert faced off against senior Hospitality major from Ontario, Ethan Sykes, in the cooking competition in front of an audience and three selected judges at the Center of Academic Engagement. Gilbert was victorious on what was a close margin, by one point in a 90-point scale. Tickets were $5 per person and included a pasta buffet. All proceeds of the event went to the Autism Society of Northwestern Pennsylvania.

The competition worked just as seen in the TV show, with minor changes. There were two rounds, in which contestants prepared an appetizer and then an entrée. The appetizer round allowed 15 minutes for Sykes and Gilbert to prepare a dish, the entrée allowed them 20 minutes.

“For each round we got a basket of mystery ingredients we had to use,” said Gilbert. “So the first round was using ‘Captain Crunch’ cereal, coconut milk, coffee and garbanzo beans that we had to use in our dish. It worked pretty much like the show where we had time constraints.”

Gilbert, who is a 25-year- old transfer student originally from Pittsburgh, Pa., said he was surprised to learn that he had won the competition. He confessed to having never done anything like this before. He is used to cooking while having all his ingredients in place, but this time he had no idea what to expect.

“This was different, because I had to adapt and improvised to what was in the bucket [of mandatory ingredients],” said Gilbert. “I didn’t know what was it that I was going to be using. When I was at home trying to figure out what I was going to make, I was like, ‘you know I can’t really plan on anything, because it’s going to change no matter what I plan.’ So I went into it blind, with the techniques that I have learned over the years.”

After the event, Gilbert took home a trophy that stated “World’s Best Cook,” as well as the recognition that the event was held to benefit the Autism Society of Northwestern Pennsylvania.

“It went to a good cause,” Gilbert said.

Gilbert, who has been cooking for seven years, attended Penn State University right after he got out of high school. He switched around different majors, not really knowing what to do. It was during his time there that he worked at a kitchen downtown and soon found out that he preferred going to work as a cook over going to his normal classes at the University.

“I took a little break from college and once I figured what was exactly what I wanted to do, I heard about Mercyhurst and about their program and how they have a really high placement percentage for the Hospitality program,” said Gilbert. “I enrolled here this year and it seems to be going really well for me.”

After he graduates, Gilbert hopes to find a job in the hotel industry. After having worked in the food and beverage industry for many years, he knows that the hours for professional chefs in that field can be difficult to handle, especially if he wants a family in the future.

“I’d like to be a general manager of a hotel by the time I am 40. That’s my long term goal,” Gilbert said.

Gilbert said that he has seen “Chopped,” but prefers watching the show “Cut-Throat Kitchen.” When asked about whether he plans on ever participating in one of these shows in the future, he wasn’t too sure about it.