‘On the Town’ in Taylor Little Theatre 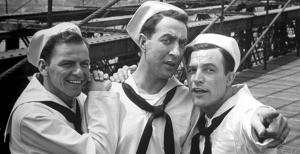 The award-winning musical “On the Town” will be playing in Taylor Little Theatre as part of the Sunday movie series.: miac photo

With only a few more Sundays left in the Sunday movie film series, be sure to head down to Taylor Little Theatre to catch another great film.

This week’s film is “On the Town.” This classic film stars Gene Kelly, Frank Sinatra and Jules Munshin.

“On the Town” is a 1949 musical film directed by Gene Kelly and Stanley Donen.

One of the greatest musicals of all time, “On the Town” boasts memorable music and iconic shots of New York landmarks.

As three sailors, Gabey, played by Kelly, Chip, played by Sinatra, and Ozzie, played by Munshin, begin their shore leave. Gabey falls in love with the picture of “Miss Turnstiles,” who is actually a woman named Ivy Smith.

The sailors race around New York attempting to find her in the brief period they have while on leave.

They are assisted by and become romantically involved with two women: Ozzie with Claire, an anthropologist, and Chip with Hildy Esterhazy, an amorous taxi cab driver.

Claire claims that she has found her passionate “Prehistoric Man” in Ozzie at the Museum of Anthropological History and Hildy invites Chip to “Come Up to My Place.”

Gabey takes Ivy on an imaginary date down “Main Street” in a studio in Symphonic Hall.

Later, Chip sincerely falls for Hildy telling her “You’re Awful,” that is, awfully nice to be with.

That evening, all the couples meet at the top of the Empire State Building to celebrate a night “On the Town.”

When Ivy must leave early to work as a cooch dancer, they have a number of adventures before reuniting with her at Coney Island before their 24-hour leave ends and they must return to their ship.

Although their future is uncertain, the boys and girls share one last kiss on the pier as a new crew of sailors heads out into the city for their leave.

In 2006, this film version ranked number 19 on the American Film Institute’s list of best musicals.