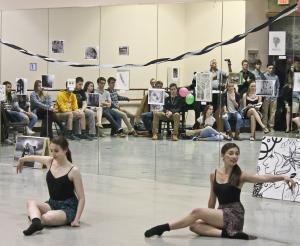 The event, which took place on Tuesday, April 14, was standing room only and featured student dance, music and recitation performances.

Mark Santillano, assistant professor of the Dance Department, served as adviser for the event this year.

“The Salon Show began seven years or more years ago, where the students could choreograph and perform without all the stress of a main stage show,” said Santillano. “It not only showcases the students’ dance ability but also allows other artistic departments to participate and showcase their talents as well.”

Though it is has been organized each year by the Dance Department, the Black and White Salon is open to the entire Mercyhurst community.

“Other departments are always invited and encouraged to participate,” said Santillano. “We have had in the past students from the Music Department play their instruments and sing as well as students from the English Department read poetry. The Laker dance team had even performed in the show this year.”

The Salon Show was re-named the Black and White Salon in memory of Jenni-Lyn Watson, a junior Dance major who was murdered by her ex-boyfriend in 2010.

“The whole Dance Department was affected. We are all a very close group and when we heard she was missing, it affected all of us,” said Santillano. “We were devastated to hear about her death days later. And the Salon show became a fundraiser for Jenni-Lyn.”

The Salon Show was re-named the Black and White Salon due to Watson’s affection toward panda bears. It has also become a fundraiser in Watson’s name for senior Dance majors to help offset the costs of auditions according to Santillano.

The show not only showcases student talent, but also includes raffle tickets and a baked goods sale that all support the fundraising event.

The Dance Department hosts many shows throughout the year with the next performance in two weeks called “Raw Edges” in the Mary D’Angelo Performing Arts Center.

“This show has been going on for 17 years and it is a main stage show,” said Santillano. “The students are in charge of everything with only a small amount of overseeing from the instructors. The students not only choreograph the event, but they also choose the music, and paint the sets as well as perform. It is very exciting.”